Paolo and I had been looking forward to this event for weeks: the third edition of Queers and Punks. I do not deny, the thing that made us take the decision to leave the good old Brianza to reach Bologna is definitely the possibility to view another time the Restarts, one of the bands that had impressed us the most in the four days of Rebellion Festival 2018 in Blackpool.

With the passing of the days however the details of the evening have become more and more interesting. Raw, Discomostro, RYF and Padiy were also added to the line-up (the latter to us unknown until then), the chance to finally meet Tom and Zoe in person but above all we realized the importance of the topic behind this event. As the title suggests, I’m talking about the LGBTQ+ topic. It is clear that, despite the progress of the years, there is a regression with regard to the gender issue. Very often you find yourself repressing what you really are to be accepted by the crappy society we live in or even by your own family, which should be the first to defend the personality and choices of their own children. Unfortunately, the news are not denied and almost every day we see violence of gender, both verbal and physical.

That’s the reason for the sentence in the subtitle taken from the song “Backwards” by the Restarts which could not be more appropriate: “We’re trying to move forward, you’re taking us backwards“. Participating in these evenings, therefore, is more than a duty, to support all that is considered “wrong” by the dogmas that are imposed on us since childhood and fight against any homophobic, transphobic, sexist and patriarchal policy. So, maximum support to these evenings that combine the very important queer topic with punk counterculture! Queers and Punks unite against Giorgiaaa!

We left home shortly after lunch to avoid any accidents on the highway and in less than three hours we were in Bologna. After a little snack we headed towards what will be the location of tonight, a piece of history you can say: L’Associazione Musicale Culturale Vecchio Son, a reality kept alive by Steno (singer of Nabat), Marianna and others. The venue, besides hosting concerts, has several rehearsal rooms and is also used for dance and singing courses. We parked the car and then we walked towards the club and we immediately saw Tom who was bringing the distro inside! Now familiar, he made his way down the descent that precedes the entrance of the Vecchio Son and, after entering, Paolo and I went exploring. The second sober encounter of the evening were Discomostro, in totally hung over from the day before but always beautiful, we exchanged two words and continued our tour. In the two open rooms there were stands of self-productions and distros and finally I had the opportunity to see Radio Punk stand where we stopped to talk to Tom waiting for the performances to start.

It was 21:30 and the evening started with Padiy and her project Back from the Stake – Against Fascist Attack, a sound intervention on the testimony of Rosetta Padula, who survived the fascist attack on Radio Donna in 1979, the feminist broadcast of Radio Città Futura in Rome. The performance was supported musically by So Beast, whose bases were more than suitable as a background to Padiy: they gave me anguish, sadness and anger but above all I imagined the whole scene in front of my eyes. Great.

Then it was time for RYF, acronym of Restless Yellow Flowers. Francesca, an artist from Ravenna with an EP and two albums, “Shameful Tomboy” just released (18th October), showed up with her guitar and slapped us with her angry music and with the desire to give voice to all the difficulties which the people considered “wrong” are forced to face every day. I was amazed during the whole performance, RYF’s got this crazy, scratchy voice that’s ripping your soul out, and all those pedal games that she played, they got me stuck. She concluded with the homonymous song from her new album “Shameful Tomboy”, concerning the first episode in which they made her feel inadequate, at the age of five. I saw myself  a lot in this song, because it happened to me too to be called a tomboy, sometimes even just for the music I listen to. Like Francesca, I’m proud to be like I am.

We went out to get some air and to my surprise I had the opportunity to meet KeTz, a lifetime social friend, and Mara (thanks for teaching me the kawaii method to pick up).

We went back and now it was time for my friends Discomostro, that I see for the first time outside the walls of Milan, to go up on stage. This at Vecchio Son is the last date of the tour, after which they will take a well-deserved break (will they start working on the third album?). The friends of Bologna began to party although the set of Discomostro, I’m sorry to say this, is not the best among those that I’ve seen. The hangover had the best unfortunately. Enjoy the break, on your return I want you stronger than ever.

Then it’s the turn of the British Restarts with their ska-shaded street punk, who for the occasion present their new album “Uprising“, full of current content regarding politics, mental health and of course the LGBTQ community. They started very fast with “Panic”, passing by “The One Percent” present in the split with Subhumans, “Out And Proud” which deals precisely with the topics of the evening, “MIA” dedicated to women, “Outsider” and “Independentzia” the most awaited along with “Big Rock Candy Mountains”. There was no more vital space in here, some did stage diving to compensate the empty space above our heads and inciting with the usual one more song, the Restarts grant us an extra with “Boozin”. They made me reenact some of that punk vibe that I felt at Rebellion that I miss so much, but that night the set was far more explosive. The concerts in the clubs have an intimacy that it’s difficult to find in bigger locations. Cool, see you next time!

To close the evening, from Cagliari with fury there were Raw, that I had not seen since February. I noted with pleasure a new entry in the line-up: Silvia on the guitar. Very tight HardGore punk, S&M onesies, crucifix and bible are commonplace in Raw performances. Kambo holds the stage as few can do, impossible not to find similarity/tribute to GG Allin. Among the songs in the set there were “Boring”, “If the cats are united”, “In God we trust” where Kambo’s intervention is not lacking, turning the cross upside down: “God upside down like all tyrants should be“. How fucking right he is. They finished with “I kill everything I fuck”, “Nazi trans fuck off” and an encore of “In God we trust”. Pure show.

The third edition of Queers and Punks ends here and we thank the collective Bologna Punx and Vecchio Son for organizing and hosting the evening, the bands, the stand guys and all those who participated (guys occasionally come to Milan and teach us Polentoni how to party as only you can do, I hadn’t seen such a hot audience for a long time!).

Live report and photos by Silvia Pirotta
You’re free to use the photos, but please credit the photographers and Radio Punk, thank you!
As usual, if you’d like HD photos, feel free to contact us at info@radiopunk.it or on Facebook and Instagram! 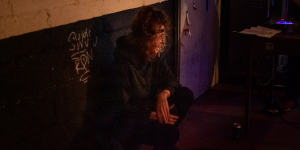 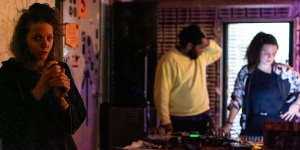 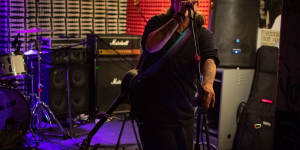 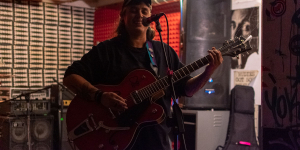 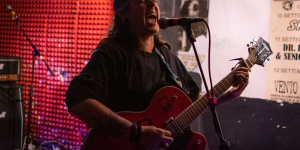 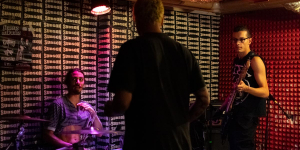 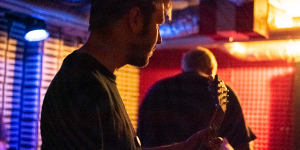 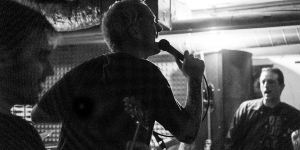 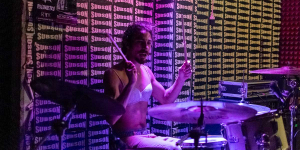 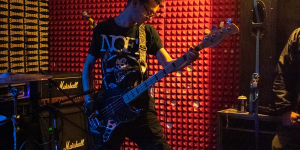 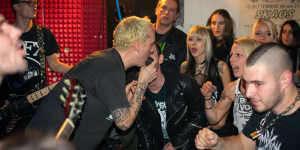 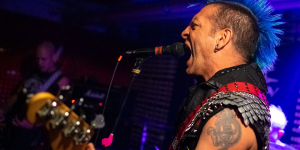 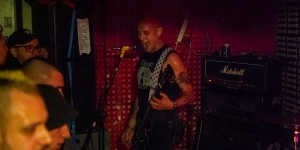 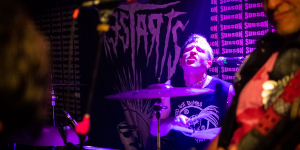 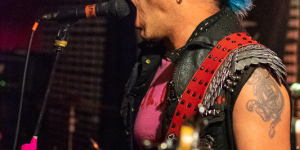 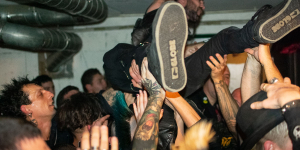 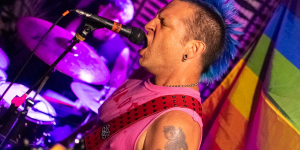 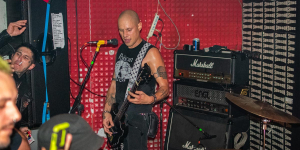 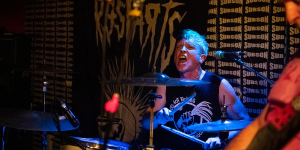 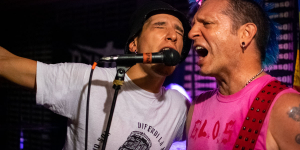 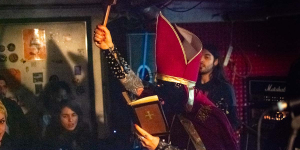 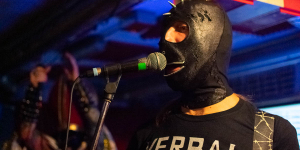 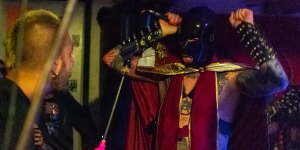 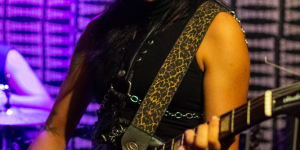 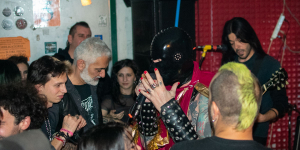 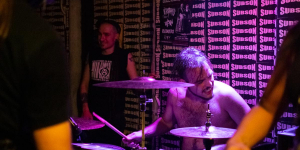 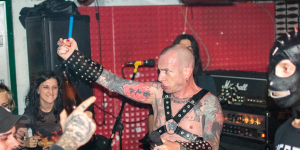 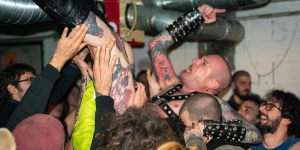 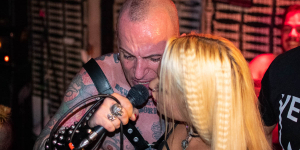