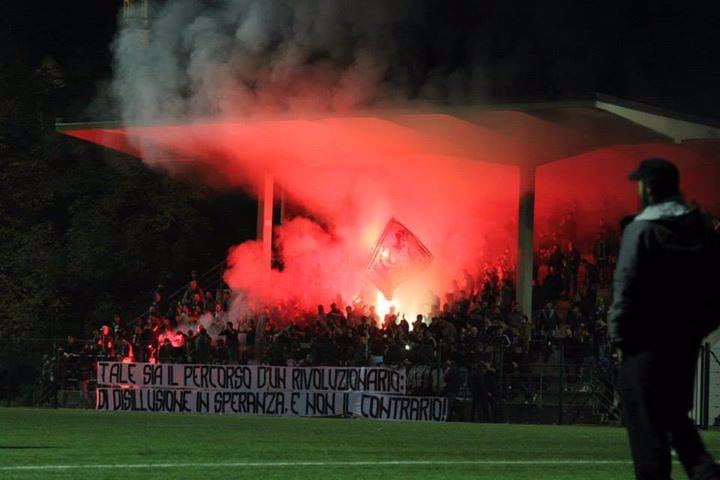 The history of Centro Storico Lebowski deals with punk culture, or better, with its attitude. After all, what is more “do it yourself” than putting together your football team and throw it as a time bomb in a world where, apparently, you can make your way by yourself, only applying some pre-established rules?

As matter of fact, everything is born from a group of teenagers getting bored on some square benches. Usually, a situation like this leads to the birth of a rotten music band, but this time is not the case.

Leafing through some local zines, it turned out that there is a football team playing in the Third Category that is named A.C. Lebowski. They always loose, taking goals following staggering rhythms. Their uniforms are grey and black, because they are the cheapest ones. In few words, they suck, and our young heroes of shooting the shit feel that a kind of magical affinity is born: with a completely one-sided decision, they became the team’s Ultras group.

For one year, they brought on the most miserable fields a whirlwind of idiocy, unconditioned passion and noise. If you substitute the world “fields” with “stages”, the analogy comes easily.

But, just as on stages, if a myriad of similar experiences naturally extinct, somebody instead, for a combination of reasons, is able to make success, which does not mean selling oneself to the mainstream, but simply becoming beautiful and jumping out also at those who are outside the small group. Imposing oneself on the scene.

After ten years of this wild wandering, in 2020 the “do it yourself” culture definitely takes form and the Centro Storico Lebowski is born, the Ultras’ team. It really is their own team and they can decide each single step to take.

There is no owner, neither a major stakeholder. Nobody makes the rules, if not the group altogether. Then one gets to like it, having your own toy at free disposal is just a part of the fun.

Who was there from the beginning grows up, and growing up is not a synonym for “setting ones’ head straight”, but it is about acquiring new skills, interests, and a desire for new challenges. Then, lots of more people arrive. Somebody even starts to understand something about the football game. A “real” mister falls in love with the project and brings the Drugo through won championships, reaching the Promotion category, where the team finds its place nowadays.

The sixth series is a championship where there are teams that spend hundreds of thousands euros every year only for being the first team. Before the Coronavirus, we were third in the rank, many people believe that we were going to win the championship.

Now there is a different mister, “real” as well, a skilled technical staff and a team that plays football and does not limit itself to give all it can and “take it as it comes”.

The point is that, around that sloppy punk group, during all these long years, a community of hundreds of people took form (at the moment, partners are less than 800). They are people who just fell in love with this smog-coloured t-shirts (as one of the founders likes to say), with the way in which this team plays football and with the situations that they found and lived by approaching this experience.

In the meantime, there are two female teams, one juniores, a 5-member team, and a football school with myriads of kinds and relative parents. Most of them become an active part.

If fifteen years ago they would have seen those teenage monsters screaming from the terraces, they would have never thought even of sharing a portion of pasta with them, probably. They would have taken their children’s hands and brought them away.  Instead, they have shared a meal with them, as well as meeting and gatherings, they even screamed drunk together, they let them play with their kids. Some of them are also instructors in the football school

It would be wrong to say that the spirit has remained intact. The possibility of free interaction given to people is always source of change, of evolution. We can say that everything has been enriched, but surely those moment of wild self-expression never lacked. Sometimes they also lead to troubles with the one who do not like them, usually wearing blue, but it is okay.

Even though it could not be so clear at first sight, that old teenage punk group never broke up, they did not got their head together. On the contrary, it has became a little community and now they even play football rather well.