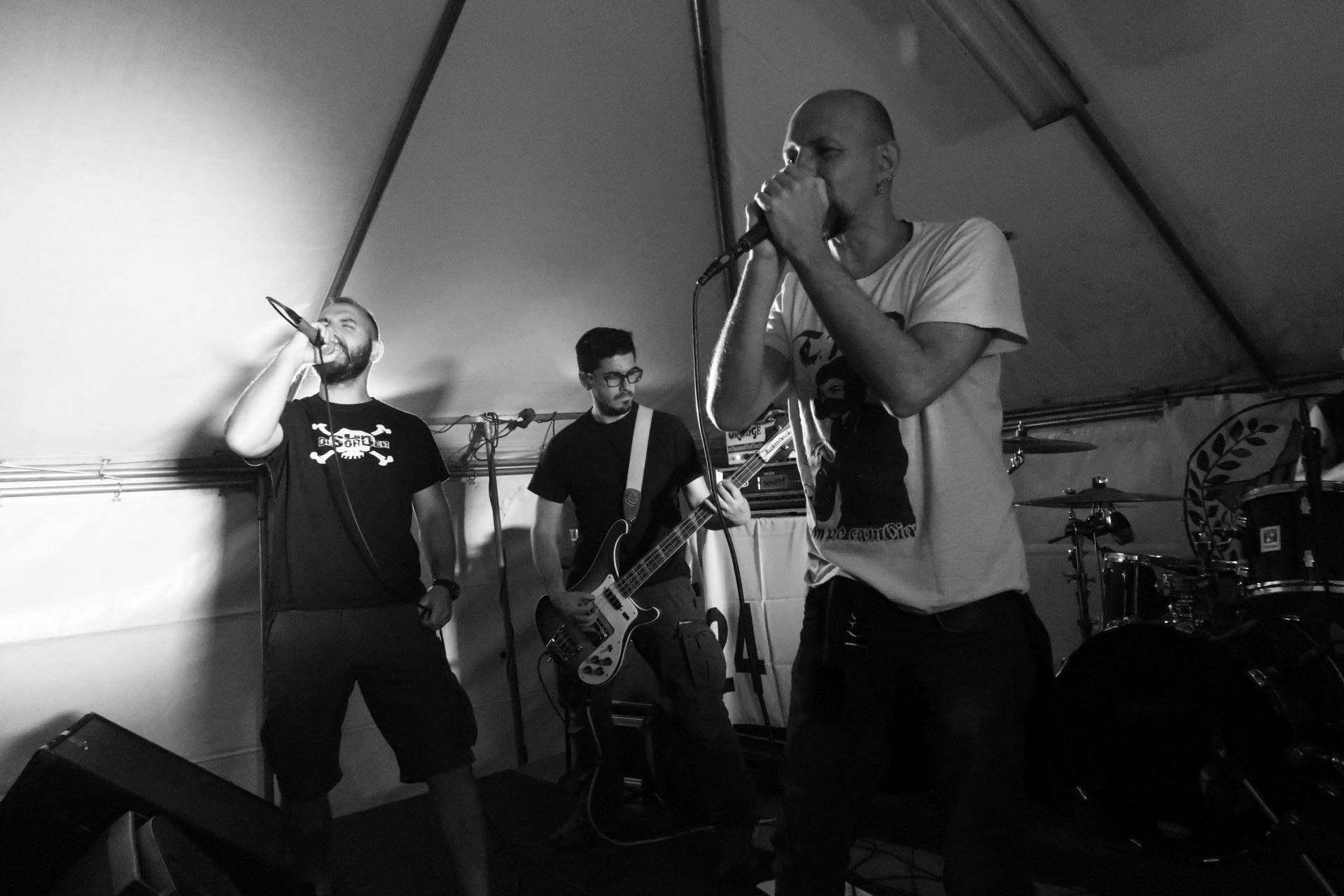 Here is the chat we had with Affluente, a hardcore punk band active since 1992

Active since 1992, Affluente shouldn’t need an introduction. Being the main representatives of the Italian hardcore fundamentalism, they are, musically speaking, extremely powerful and never predictable. With this interview we are trying to let you acquaint with them a little bit better.

Radio Punk: It is a pleasure to have you in Radio Punk. Welcome! For the unbelievers who still don’t know you, would you like to introduce yourselves?
Affluente: Sure! We are an hardcore band from Ascoli Piceno and Teramo. Our lyrics are exclusively in Italian, we have been playing since a long time, after various band members changes, since about 10 years ago the band formation has been stabilised with Gabriele as drummer, Frensis as bass player, Piero (the one answering the question) and Yuri as singers, finally Frankie as guitarist.

RP: The band has formed in 1992 in Ascoli Piceno, what led you to the choice to start a band?
A: The choice was made by Carlo Cannella, he sang with Stige, which disbanded at that time and he told us that he “still had something to say”. So, he recruited Frankie and Giorgio (who played death metal with Furious Burking) and, together with Peppe, the Stige’s drummer (who is my brother) and I made Affluente come alive. The very first formation was Carlo as singer, Pepper as drummer, Giorgio as bass player, Piero and Frankie as guitarists. If my memory serves me right, we rehearsed for the first time in august 1992.

RP: In the early 90’s, Ascoli also hosted bands as Agnostic Front. Would you like to tell us something about the scene history in that period? Do you believe that the turmoil of that years is nowadays still present among young people?
A: At that time, in our little provincial city, there were many places where to play, there was “Le Zanne”, the venue where Agnostic Front and Madball used to play, there was a squat in Via delle Terme, which also hosted Ratos de Porao. In a nearby village there was a disco on roller skates, which Carlo rented as as a location where to organise some gigs (Ignite, Business, Slapshot). In San Benedetto del Tronto there was the “Totem e Tabù” squat, where there was a concert every Saturday night. Nowadays, all this places do not exist anymore, to be honest I don’t know what youths of today do, for sure, in Ascoli Piceno they don’t listen to Punk/HC. I have started to go to live concerts when I was 14 or 15 years old. In the early 90’s, if you wanted to share something with other people it was necessary to meet physically, face to face, leaving home and look for people and places. Today, all of these is possible by remaining in front of a monitor, without even realising who you are communicating with, I honestly find it depressing.

RP: Carlo Cannella, the first Affluente singer, in his book “The city is quite… Shadows speaking, a punk story” (title based on a Peggio Punk LP) speaks about the willingness that there was at the time to change things in the reality in Ascoli. Do you reflect yourselves in his words?
A: I believe that Carlo, with his challenging lyrics, was trying to change the mentality of people in our city, but there was more. I think he really wanted to open people minds, and not only in a figurative sense, especially for what concerns somebody in particular, like fascists, etc. In his first book he mainly tells stories about the achievements of these deprived and restless teenagers, in a city, Ascoli Piceno, still immersed in that medieval darkness, which here corresponded to the 80’s. Naturally, the idea of changing people minds has almost completely failed, but at least they tried, doing what they believed it was right, and we find ourselves completely in his lyrics, which we are still singing with belief.

RP: Speaking of Cannella, as years passed, the band formation has been subject to various changes. In spite of this, your musical style and the power of your songs has not changed, neither they have been affected by it. Is there a secret?
A: I believe this is due to the fact that almost all of our songs have been written by me or Frankie, and we have been in the band from the beginning. Then, naturally, the high motivation to play and the inner rage towards the things that we always bring inside ourselves also play their part.

RP: According to you, what is the punk-hardcore scene from the Marches and Abruzzo still missing in order to become more incisive on a national level.
A: within few kilometres, in addition to us, we have had bands like Straight Opposition, today are the 217, Mud, VibrataCore, I don’t believe we are messed up.

RP: Time has passed since Logica Dominante. According to the actual Italian situation, do you believe it is necessary to be more pissed off now than 20 years ago?
A: Probably when you are 20 or 30, you see the future in a more optimistic way, but I believe that today the situation is worst, both from a cultural, political and relational viewpoint. I think that the sociality has collapsed, burying people under indifference and egoism ruins. The problem is that few people realize it. So, yes, it is necessary to be more pissed off with respect to 20 years ago.

RP: Speaking of lighter topics, you have played in many places, would you like to tell us the most absurd or funniest episode that happened to you? And which has been the best concert you have attended?
A: An episode that we usually recall is about a concert in Lodi: after the concert, the guy responsible for the mixer, who was also the one that should have hosted us, sometimes came to us, out of breath and sweaty like a fish despite the fact that it was winter, and told us “Affluente, five minutes and then we go to sleep”. He kept on like this for at least two yours! The next morning, before leaving, we wanted to give a t-shirt to him as a gift for the his hospitality, but he refused it by saying: “I do not wear t-shirt with writings!”. For what concerns the best concert I don’t know what to answer, every time I see other bands playing I usually see interesting things (apart from rare cases).

RP: Which kind of relationship do you have with social networks?
A: We have a facebook page where we post photos and video, a lot of people use it to contact us for concerts, but we are not too much social.

RP: You three favourite albums of all times?
A: According to me they are the first album by Suicidal Tendencies, Rock for light from Bad Brains and Liveage by Descendents.

RP: Which kind of suggestion would you like to give to young musicians who want to follow your path and which is the best suggestion that you have ever been given?
A: I think that an important thing for a band is coherence, both in terms of lyrics and music genre, so I would suggest to not follow temporary trends and to play what you like the most and to stay passive to changes. Also, since we are speaking of punk/HC, I believe that it is necessary to have a good dose of perseverance and obstinacy. A good advice have been given to us by “Il Sardo”, who told us to print our t-shirts (which was a thing that we would have never done few years ago), and I have to say that he was right! They help to sell many more albums…

RP: Thank you very much for the chat. We conclude by leaving you the space to add whatever you want to say!
A: We would like to thank Tommaso and Radio Punk, but also who follow us, both from many years and more recent times, all the independent labels which have coproduced our albums, all the bands that have shared albums and stages with us, and all the ones that are reading this interview!