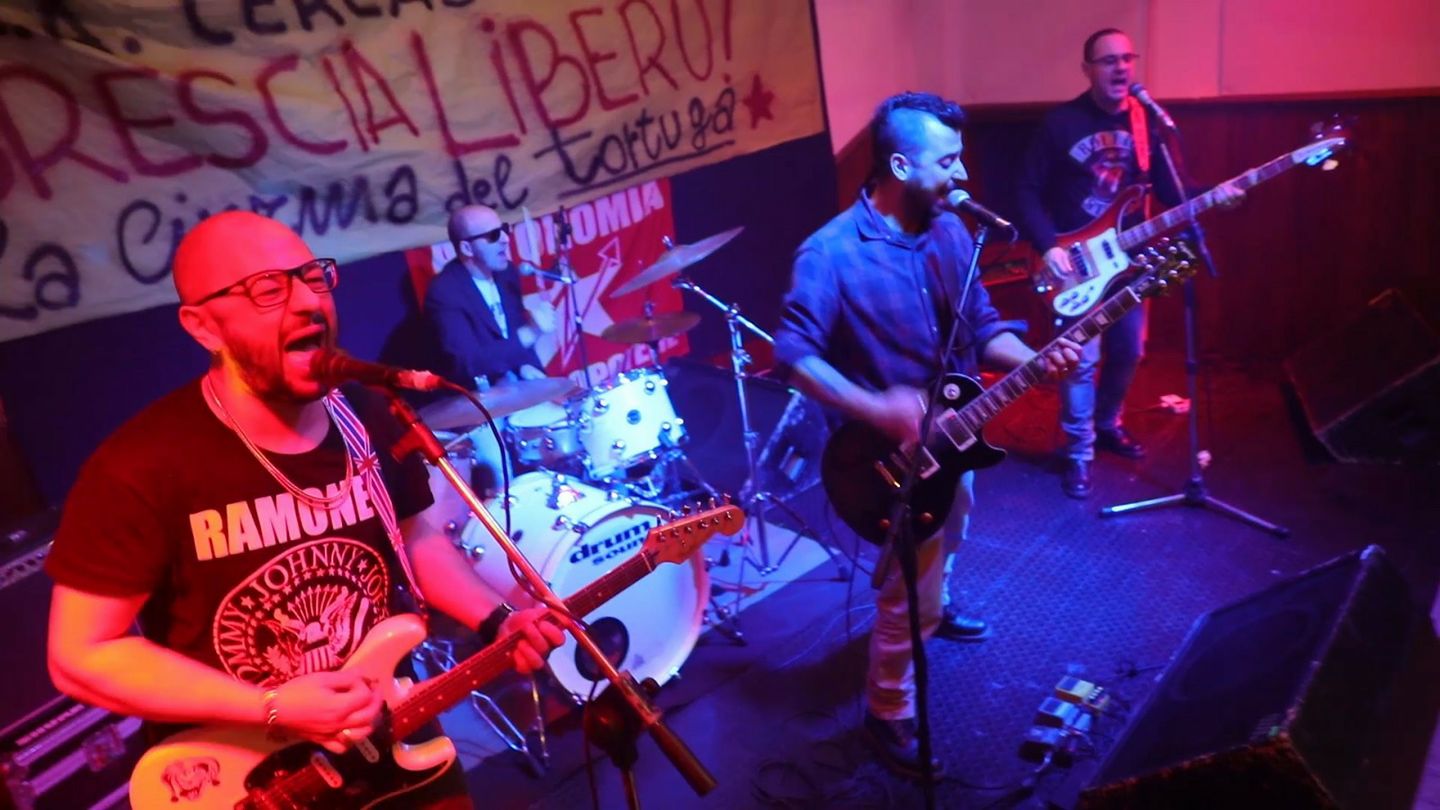 We chatted a little with Atropina Clan, a punk rock band from Val Susa, Turin, Italy, since 1998, a symbol of the NO TAV fight (Italian movement against the construction of the line named from the Italian TAV acronym for Treno Alta Velocità, high speed train) and committed to defending human rights. In 2019 Essere Umani comes out, their third self-produced album that saw them in an 8-date tour in northern Italy. They will be in the lineup of the next edition of Punk 4 The Homeless in Sheffield (UK), and they spent some time with us.

Radio Punk: Hey guys, how’re you doing? It’s a pleasure to meet you. So, tell us about your beginnings and the path that led you to the release of your latest album “Essere Umani”.
Atropina Clan: Hi! We are fine, it’s a nice moment both at a musical and human level. Well, we started like many other bands … in a garage in Sant’Antonino di Susa near Turin, in the winter between ’98 and ’99. We were very young and totally unaware that we were going to release a record in 2019! ”Essere Umani” is our third studio album, maybe it’s our “official” comeback album, 13 years after the previous one … let’s say, we took it easy!

RP: 2019 marked your comeback with a new album, after a fairly silent period. What have you done in the meantime?
AC: Well, actually in 2008 we broke up, but luckily, although we were no longer a band, we always remained very close friends, we often saw each other and went out together. We played with other bands and we minded our own business. After ten years we needed a break, probably. But we never got over the desire to play together. So, in 2010 we decided to meet once a year for charity, in favor of cancer research, so we started an annual festival, LIVE / FOR / LIFE Festival that this year celebrates its 10th birthday!

RP: Your approach has always been characterized by very clear positions and political messages. What are the most addressed topics in your latest work Essere Umani?
AC: “Essere Umani” is about humanity, or rather the return to humanity in a historical period where ignorance and wickedness rule. We are a militant band, we think that music is a very important communication tool to get people to reflect. At least, we try!

RP: Essere Umani is a very interesting work, with different shades, from ska rhytmic pulsations and sound fragments closer to the more classic punk rock. How did you define the sound of the album?
AC: Let’s say we got there in a very natural way. If you listen to our first works you will find a lot of difference in the sound and arrangements. We’ve aged, we all are at least forty years old! Joking aside, we spent lots of time, trying to define the “right” sounds and arrangements, we had fun trying to find new solutions that don’t follow the clichés and hopefully we succeeded.

RP: How does the creative process evolve within the band?
AC: Good question … So, everyone in Atropina Clan writes and it’s cool! Usually one of us suggests a riff, usually guitar and vocals, so we make a take with some simple basslines and drums. Then Tanaka, a great guitarist and also artistic producer, arranges everything at home and shares it in the band’s drive. If everyone likes it, we record everything waiting for the actual recording. Ah, clearly all done by us in Ceppa’s studio, our bass player and producer!

RP: In these months we’ve seen you on different stages, mainly in northern Italy. What has changes compared to the early years? Not only thinking about your personal experience but also in general, considering the live show as a participated moment of sharing.
AC: The biggest difference compared to the first few years is the amount of beer before, after and during the show… when we were twenty we used to drink twice as much! (laughing)… No, come on, we have always been a band that makes a lot more live than in the studio, concerts are the reason why we play, we love it! We feel live shows like a deep sharing moment, almost communion. We give 110% on every occasion, on any stage, whether there are 1000 or 5 people.

RP: Do you think punk music could be still relevant today? I mean, social and cultural issues have changed. How do you feel today as a punk band? How do you live it?
AC: Well, punk has been considered dead since it was born, and yet we’re in 2019 and we’re still talking about it. Today, being a punk band is even more stimulating, and punk belongs more to a niche group than last decade. We’ve no space in big radio or main stream channels, but at the same time there is a pretty cool underground scene. After all, topics that make you pissed off don’t lack, and it’s all sooo punk!

RP: What’s your opinion on underground music in Italy and around your city, Turin, now?
AC: Let’s say we do resist. The current political / socio / cultural situation has many topics for reflection and consequently also artistic ones. There are many good bands around, which would certainly deserve more visibility. In Turin there is a very long punk tradition, from HC to melodic, we’re lucky. There are many venues and the new generations seem to be attracted by this kind of music. During our tour, we could have been the parents of many kids down there. Cool!

RP: In the current scenario of musical fruition, what do “do it yourself” ethics mean for you?
AC: Well, good question. We’ve always done everything by ourselves, whether for the records, or for the organization of tours or even just a single concert. No labels, no agencies or similar. Probably if we had worked with professionals we could have done something more in terms of popularity, but this would have involved some differences, for example prices of records or tickets and we cannot tolerate it. Then what about the satisfaction of designing, conceiving, making and finally releasing records in full autonomy?

RP: In January we will see you in an international context. What do you expect?
AC: This will be the second time we will tour outside the country. The first time was in Barcelona two years ago, this time we will be in U.K. in Sheffield, a punk festival in favor of the homeless. We are excited. In Barcelona singing in Italian was not a big obstacle, as they’re latins, this time we go to the Anglo-Saxon land. But surely we will live this experience like all our “first times”, with the desire to have fun, to make ourselves understood, to make a big mess. Surely we will meet some wonderful people, and we’ll come back home with good memories!