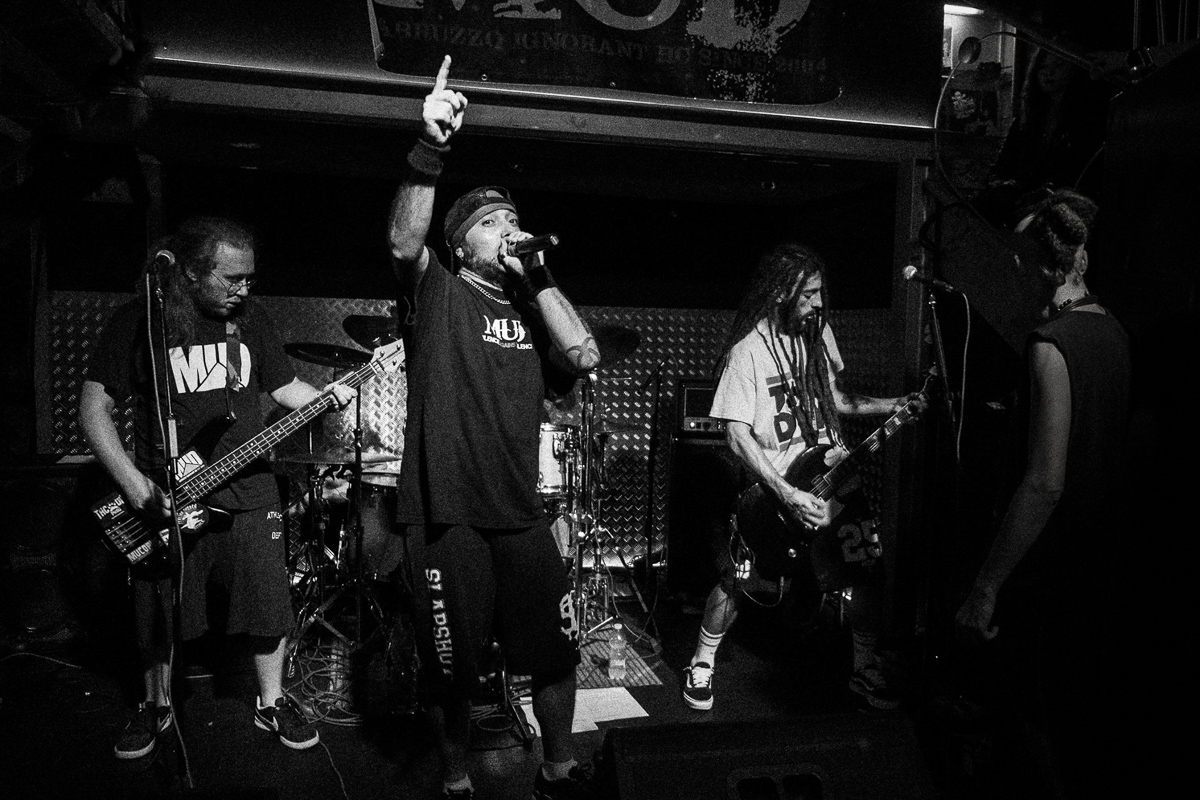 Here is the chat we had with Mud from Abruzzo who recently celebrated their 15th year on stage!

In order to celebrate their 15 years Mud organised a hardcore party on the 28 of September in Teramo at Sound. We were there together with many other people! In this interview, we decided to talk to the birthday boys and ask them how it went.

Radio Punk: Hi guys, why don’t you introduce the band and tell us a bit about yourselves for all those that might not know of you yet?
Mud: Hi all at Radio Punk, we are glad to be here. MuD were born in Abruzzo in 2004. To be specific, that was in Val Vibrata near Teramo. A place that is the “4th World”. We have since then, despite a vast number of line-up changes, managed to produce 3 full length albums, one EP and a demo in 2006; we have also played over 300 gigs (although it has been a while since I counted them last) both in Italy and many places in Europe. We like “ignorant” (simpler – translator’s note) stuff, be that metal, hardcore, punk, rap or other, we feed off of and are inspired by this mix of genres, so much that years ago we decided to describe ourselves as “Ignorant Hardcore”. We play a mix of metal, hardcore and punk. All our influences are from bands from the 80’s and 90’s and early 00’s at most. We do not give a fuck about trends in the music scene and we often go out of our way to avoid writing things that are too “modern”. We do not to care whether something is too metal or punk or whatever… If we like something, as long as it fits the “MuD” style we created or tried to create over the years, we keep it. Our current line-up is Lucone (Lucone is a nickname for someone named Luca – translator’s note) on drums, Edoardo on bass, Frankie playing guitar and finally, me, Mauro as the screamer. I am the only “surviving” member from the original 2004 lineup. We are currently working at a steady pace on some new material that will be featured in the new album. As soon as we have some tracks ready, we will start thinking of the recording and all that. Also, as usual, we will tour and play everywhere and anywhere… We do not stay put one moment, myself especially. Ahaha!

RP: you have recently celebrated 15 years as a band. All and all, do you feel satisfied about what you have done?
M: I would say so. I would also like to think we could have done way more if we had not to change our line-up basically once a year. At any rate, considering how remote where we are from is, that is understandable. Considering then all the factors that put at an extreme disadvantage I would say that yes, I am satisfied and I think the others are as well. I can for sure say so for Frankie who is now a veteran of the band having played with us for 10 years. Lucone is very satisfied with his two years in the band as well as Edo who has been playing with us since April.

RP: At Sound you played with your friends from Affluente, Vibratacore and 217. How was it?
M: The 28th of September was like hell for us. We filled that place in a way that never was before, something we are really happy about. The night was amazing. The people seemed really into it, something that is very important for Teramo and the local scene in general. I hope things will continue so for all the other events we will be a part of in the future. We could not ask anything more of Teramo for our 15 years as a band.
RP: What do you think of the current Italian Hardcore scene?
M: Right now, it is a really nice “movement”. There are plenty of really capable bands. It might sound predictable but it is the venues that are lacking. At any rate, we continue straight ahead on our way as usual, against all odds, every day, all day.

RP: Band members have changed over the years. Has it been difficult to keep MuD going for all this time? Have you ever thought to disband the band and each take their own path?
M: I must say that it has been incredibly hard to keep the band going because of the variety of things that have happened to the line-up and because of other adverse factors. It’s hard to live in the Provincia (province, the outskirts of towns – translator’s note) for those that make Satan’s music like us. Without this however I do not know where I would be. It can be described as a life-saver. Years ago, we were basically broken up for 6 months. At that time, we were at a crossroads… thankfully, we decided to take the right way, the one that is all about continuing to kick ass.

RP: Do you remember your first gig?
M: Of course! It was in April 2005 in the Ancarano (Teramo) Auditorium. On the flyer we were “MuD – Crossover”. The public voted on the best band. We won because all our friends came Ahaha!

RP: What was the most absurd gig you have ever played?
M: This is a hard one… Possibly one at Kaleidoskp Festival in Tuzla Bosina, in 2016, in front of 6000 people! Incredible.

RP: Is there a song that you must play at every gig?
M: I would say… HOSTILE!

RP: You guys are on the Radio Punk Hardcore playlist with none other than “Hostile”! If you had to make your own personal playlist, which ones would you choose?
M: HOSTILE! We said that one already… here are 3 more: FULL SPEED AHEAD, HEAD DOWN, M.B.M.

RP: In these 15 years, has your public changed?
M: Well, not so much… All and all, it is always the same people who keep coming to gigs. Unfortunately, we can’t say a generational change has happened yet… we do sometimes see some fresh faces, it depends on the period… no real generational change as of yet. At least, that is if we consider our area, in other parts of the country I have seen a bit of that…

RP: Last year you went on an East European Tour for promoting “The Sound Of The Province”. This was not the first time you had played outside Italy. What would you suggest to young bands in order to get heard outside the country?
M: Yes it was our fifth tour outside Italy. What we would like to suggest is to do as much as possible! Play gigs, get yourself known, self-promote… You have to go out and kick ass every night, no shit.

RP: Is there somewhere in particular you would like to go back to play?
M: mh in Tuzla, Bosnia. We left a piece of ourselves there.

RP: Was creating THC DIY Prod. (an independent Teramo music label) a necessity or a dream to fulfill?
M: Maybe both. We can say that THC DIY Prod was born at a time for the band, after our previous collective (La Raje Crew) disbanded. This was the time when we were writing “Sound Of The Province”. The distro grew exponentially. We did co-productions, booked gigs (something we do a lot nowadays) and did plenty more. We are online with 2/3 stores and we see more and more “drunks” around our stand at gigs. 😀
I always liked self-production, self-promotion, organising gigs and other genuine situations, all DIY yet as professional as possible. It was also likely necessity drove us to creating our own record label.

RP: Any plans for the future?
M: Play, come up with new material, promote it, play, keep THC DIY Prod. and the band growing.

RP: As the last section of the interview, we thought of leaving you this moment to add whatever you want.
M: Thanks RADIO PUNK for this chat, keep at it. We hold you in high esteem and we respect for what you do, you are amazing.
Thanks all from MUD, we will see you around always and no matter what! FULL SPEED AHEAD!

We wish you all the best and we will be here waiting for when you celebrate your 30 years as MUD!