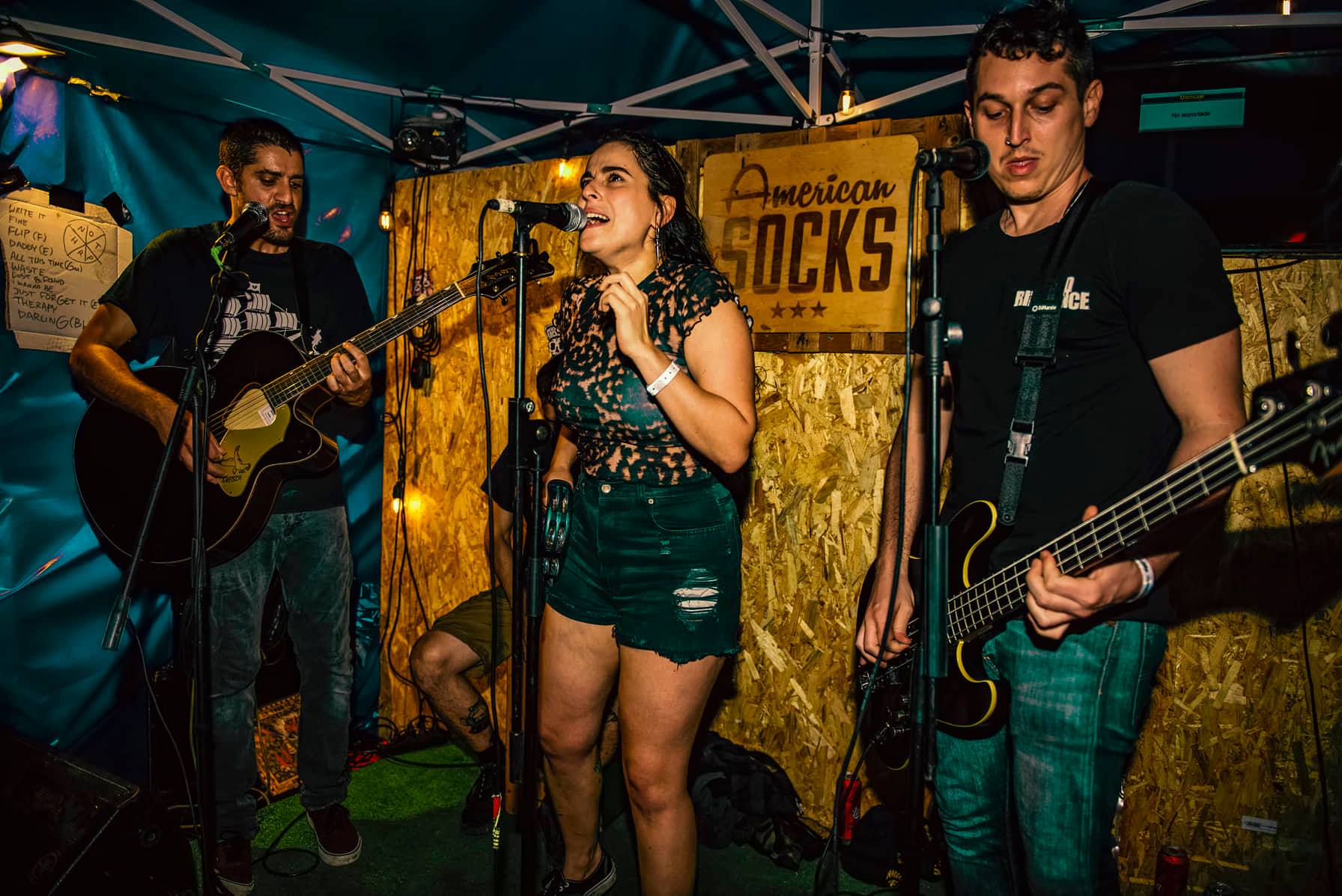 Here’s our chat with the Israeli punk band, Not on Tour

A new album, an explosive set and a surprising new project… here’s my chat with Not On Tour!

RP: So, first question, I ask this to every band, tell me something about this festival, your experience here… it is your second time here, isn’t it?

NOT: Yeah, we played four years ago on the main stage, and then the beach stage… Anyway, so this festival is amazing! Yes, it really is, that’s what it is. This feeling of gathering.

RP: Will you stay all week?

NOT: No, tomorrow we will leave…

RP: Tonight, you will play also on the acoustic stage… What’s the difference for you? I mean, the atmosphere changes a lot…  What do you prefer? How do you feel?

NOT: It is very different but it is special you know playing in acoustic because it brings out different levels of our music, it brings out harmonies and melodies.so, yes, we enjoy it a lot.
It is like that the songs are naked. It is more intimate.

RP: So, your last album, ‘Growing Pains’ has received a lot of positive critics, I mean, I love it, but anyway, everyone likes it and it had a lot of success. It is great. But now, what are the next move? Future plans?

NOT: Oh good question! You just asked about acoustic… yes it is a good timing… we really want to do an acoustic album, but taking it seriously, like a proper recording.

RP: So a completely different sound…

NOT: We will put all the effort in the arrangement, because you know, when we usually play acoustic we just bring the instruments and there’s no recording of that. There’s only the live set. And people ask us: do you have the recording? Because I want to listen to it at home… and, you know, we really want to have a recording of that because it is a pleasure for us. Because people that doesn’t even listen to punk, they like it, you know?

RP: Yes, acoustic sets can be a bridge between different genres…

NOT: Yes, exactly. So we think it is nice to have a physical copy of it.

RP: So I will look forward to it! Changing subject. Punk has always been also political, very intense… how do you look at the scene now? In your country or even in other countries since you are travelling a lot?

NOT: I think it is less political. In a way… I think it is still political. It is a different voice, bands have a different voice it is like a one person against the world, and it doesn’t speak anymore for a generation. Also, the society, it is kind of tired of fighting. We were just talking about it, as the world is controlled by right wings, and the people are tired and I feel… like the scene in Israel, it was more political when we were younger and now it is less political, but.. it is not less, it is different, because we still talk about it, we still need it.

RP: Maybe because we need it now, more than ever.

NOT: Yes! I think not only in Israel. We are all self-centered, self-obsessed. This is our generation. And the music reflects that. We are very comfortable, our political view nowadays is first of all me against something. It is not ‘we’ against…

RP: Well, the thing is that, as I said, we need it more than ever; maybe we need unity as well. And the spirit of punk, because it’s not just the music, it’s a culture. It’s a way of living. And maybe it’s a way to convey a message… do you think that punk can still attract kids to rebel against the system, do you think it is still worth it?

NOT: I think it is a place, it is a home. I can only say from our perspective. We were like, 15 years ago into shows, in Israel, and when we were young it was bigger and it was wow! But you know, you are young, it is crazy, it is big and then the scene get smaller and you know we thought, oh it’s going to die. And we get older as well – laughing – yeah, well, we were the only bands to play around and we were thinking, who’s going to come? Our friends. And then, all of a sudden, it was a bunch of kids, coming to the shows, being like, I don’t know, just punks. Just punks, you know? I mean 2019 punks can be different… It is very different, but they kind of… I think there’s a new energy, a millennium energy and I think they need that as much as we needed it when we were young. So yes, the spirit goes on, it is not about being young, it is about the spirit, and they are looking for that. It is a kind of rebellious move. But it’s also I think I found a place when I was younger, you know? You feel like at home.

RP: So, talking about your tour, you are touring a lot at least in the last years.. Do you want to tell me some crazy thing that happened to you on stage?

NOT: Oh on stage? Oh nothing… we are pretty boring. – laughing – let us think… Maybe there’s always people going too far, approach Sima, or hug her, and you know it is kind of negative…

I think off stage? Off stage is allowed?

NOT: We can say… well, maybe it is specific and the host can remember it… well, can we say it? Yes, we can say it. It was like eight years ago. We were at this place. A couple hosted us, and the guy was like a biologist. And I don’t know what the girl was doing, but they live together. Teacher maybe? Okay, whatever. And they had like a room filled with spiders. And they were missing a tarantula. And they were like: so, this is where you’re going to sleep tonight. We are missing a Tarantula, but do not worry, she doesn’t bite. And we were like, oh ok. Then we had drinks and we went to sleep. And at some point in the night, our old guitar player and our roadie back then, they were like going to sleep and they look at the ceiling and they saw a huge black tarantula. And everyone start screaming and they were calling people to catch that spider and then, the girl, the host, she came down and she was… – laughing – completely naked and very drunk. I don’t know if she remembers it because in the morning she acted completely normal. I don’t know, it was normal for her? And she was like: you need to be quiet – no underwater – and we were there trying to say about the spider, our heads down, we couldn’t look at her, can you just take the spider? Very weird!

RP: Absolutely! And what’s your relationship with fans? Like for example here there are no barriers at all… how do you feel about it?

NOT: We are completely fine about it, unless… well, if they try to catch. But we love it! It is punk rock you know, it is not rock stars or pop stars. So we talked to the people like directly. A lot of the people become friends. So it’s doesn’t feel like fans. Sometimes, I feel like – well, I can’t say, I’m only the bass player – n.d.r. Everyone’s there was laughing and making jokes about being bass players and invisible and wearing t-shirt with the text ‘I’m only the bass player’. – Anyway, going on. Sometimes, I think that, because Sima’s face is recognizable. She’s the singer. And so it’s kind of outstanding in the punk scene. So, people approach her mostly, and for me it can be too much. But I don’t know, we don’t feel the pressure. I mean, sometimes yes. We are not a huge band, but we are not a DIY band anymore… sometimes we meet people and they can’t understand that we are actually working so we are not always all the time available to talk and drink. But, yeah, is it fine.

RP: are there any bands that you want to see during these two days?

NOT: Descendents! Good Riddance as well… and we will miss Pup! Go and watch them! They are great! and enjoy!

So we will, and thanks again for your time with me!