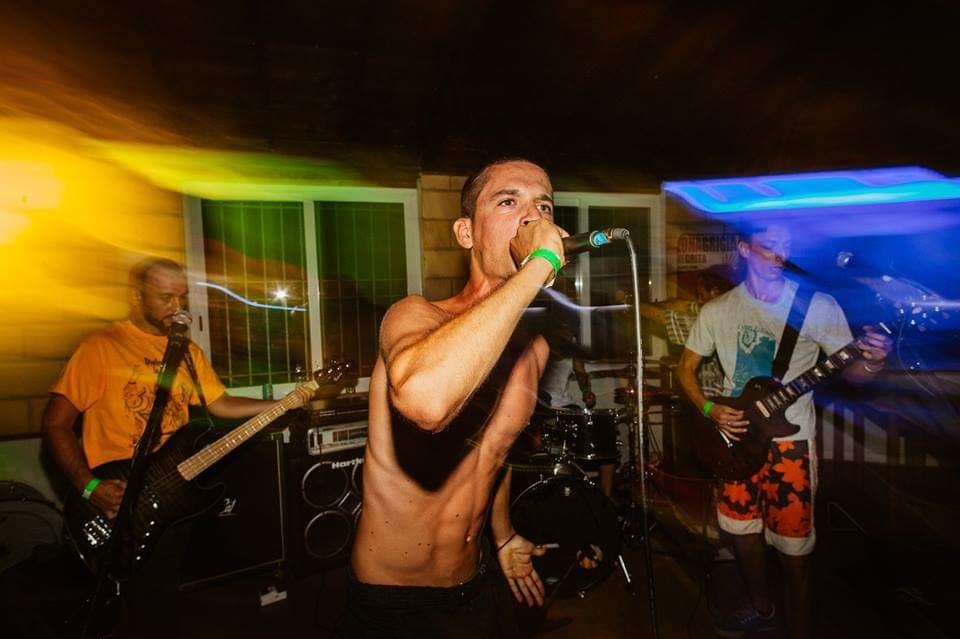 Four aces! Our chat with the hc punk band from Ferrara

The lagoon-quartet just delivered the 4th life chapter “Memori”, 4 ones, like their band members. We’re talking about Turn Against, a Hardcore/Post-HC band from the province of Ferrara, particularly from “Magnavacca” (Porto Garibaldi) and San Giuseppe di Comacchio.
Active since 2010 and with over a hundred gigs all around Italy on their backs, they were born as an Oi! Band, to then mutate their sound into what feels like a pour of pure and sharp , heart-rending and sometimes solid HC. If their first two chapters ( “Sempre fregati” & “Morte accidentale”) were focused on social issues, with the last two chapters (“Desert” & “Memori”) they’re trying to understand the hardships of everyday life with the awareness and reassurance that we’re not alone in facing it all.
We could probably write a whole novel about them, but lets cut it here and let them speak for themselves!

RADIO PUNK: Hi guys and welcome, please introduce yourselves as you wish.
TURN AGAINST: Hi everyone, we’re 4 brothers, two blood-related which are Meo (Matteo) and Bucci (Michele), respectively singer and drummer, and two others “step-brothers” Mariolo (Matteo) and Massi (Massimiliano), the bass player and the guitarist.

RP: You just celebrated 10 years of activity. Do you mind rewinding the tape and tell us a little something about those 10 years?
TURN AGAINST: We didn’t think we’d get to 10 years, for sure – even though we’re officially celebrating at the end of this summer. 10 years are not that much, but it’s a big milestone for us. 10 years of up and downs, many changes, both personal and as a group were to be made. We started very young and we went through our teenage years together, which really consolidated our relationship into brotherhood. Initially, we started with 5 of us, that is with two singers. In 2013, unfortunately, Valerio decided to quit the band without scarring our relationship. Subsequently we tried to keep a second voice member with Nana (well known singer and songwriter in the folk/punk scene) and later on with Palmiro – a dear friend and country fellow of ours, that unfortunately got into trap music. After a whole year of transitioning and resizing we decided to stick with the current members.

RP: Merch time. Let’s talk about your last record: “Memori”. – I’m listening to the EP while writing this review, and it’s absolutely terrific, NDR-
TA: The EP “Memori” takes its name from its 1st track, that talks about the memories we lived in four years of our lives in our countryside house. The two tracks indirectly refer to this idea of memory: “Giustificazioni”, in a more introspective manner, tells about a more disturbed emotional state, while “Quieto vivere” deals with more recent -and older- subjects, highlighting the values that our grandfathers left us. It was recorded in a couple days, in direct drive at the Animal House Studio in Ferrara by Federico Viola, our now trusted producer. Inside the CD you can find two jam sessions recorded to kill a psychoactive dull moment. The artwork was designed and done by our guitarist Massi, and pictures a beloved place for us on the front, and our country-style fort on the back. It has been released the last December in digipack format, thanks to the help of many record labels such as Romagna Sgroza, True Believers, Tuscia Clan and Radio Punk of course!

RP: When and why did you decide to form a band? What was the need you felt and which are the bands and genres you look up to?
TA: We came from two different projects: Meo, Bucci and Valerio used to play in a street-punk band called “Rigurgit’oi”, while Mario and Massi were playing punk-rock in “Codici a Barre”. Later on, with the dissolution of both bands, and seen the lack of local bands we immediately found ourselves sharing passions and musical tastes. Confident and with clear ideas from the start, we created the Turn Against project. Other than the bands that defined our teenage selves like NOFX, Derozer, ecc. We were mainly influenced by Italian bands like Grandine, Affluente, Strange Fear, Straight Opposition, Ingegno, La Crisi, Lyon Estate, ecc.

RP: As we said at the beginning of this interview, the first two records were very different from the  two before, both from a musical and technical point of view and for the topics covered. Can you tell us why your style changed this way?
TA: Starting on the assumption that we never focused on distinct genre but we only always tried to express whatever came from within ourselves, the change in style really happened with our personal growth. Getting older, we started being affected by other musical genres and this is what came out, without choosing a precise path to follow  but letting ourselves be driven by ideas.

RP: Tell us about Pozzo Rosso that, for whoever doesn’t know you personally, is your headquarter. Some kind of forge where your ideas are all born, a country house far away from the urban life where you can breathe slower…a really nice life choice.
TA: For many reasons we had to leave or historic rehearsal room “BaraccaOi” in Porto Garibaldi, a couple of steps from the sea. Our wish was to go to the countryside to stay in touch with nature and DIY. We found a house with a well in the middle of the garden, which we painted in red with recycled paint. That gave birth to the name “Pozzorosso”, that became our headquarters where we could realize our ideas. We’re not spilling anymore beans because you’ll find out yourself in the video for Memori.

RP: Each one of your works has been produced in the purest form of self-production. The ones who know you personally know how much you keep DIY close to your hearts. Does this influence your everyday choices?
TA: As for everyday choices as for our four records, we always tried to rely on our forces, often helped by friends, involving many DIY scenes and trying to stir away from any logic of profit and competition. It is thanks to this that I think we managed to go so far, by sharing.

RP: We’re very much aware that you care about every little detail and for this reason your works take long to be made. But you always come out with a high quality product, so the question is: what can we expect from the future? Don’t make us wait too long, please!
TA: We can’t promise anything on how long it’s going to take, but it’ll be our 10th year in 2020, and we’re already working on something new and very peculiar. So expect the unexpected!

RP: What does punk-hardcore mean to you? Do you think it’s necessary to take a stand against fascism, racism, sexism and the dynamics of capitalist slave labor?
TA: Punk-hc is the expression of anger, hatred, discomfort and social critic. In this modern society,  anti-racism, anti-fascism, anti-sexism, ecc. Are important values to defend. We always did and we will always keep on defending them.

RP: Well, thank you again for your willingness and we’ll leave you our usual “free space” to say whatever you want  to our readers! ‘Till next time, bye!
TA: We firstly want to thank you guys from Radio Punk and Ciruz from True Believers (Distruggi la Bassa) for giving us the chance to have our first interview! Said so, all we want to tell you in addition to this interview, we want to tell you one-on-one. See you on our next gigs: February the 23rd at Stella Nera in Modena, March the 6th in Civitanova Marche at the Officina Jolli Roger and March the 7th at the Cantina Gojo with out friends from the Tuscia Clan.

The spirit keeps on going strong!