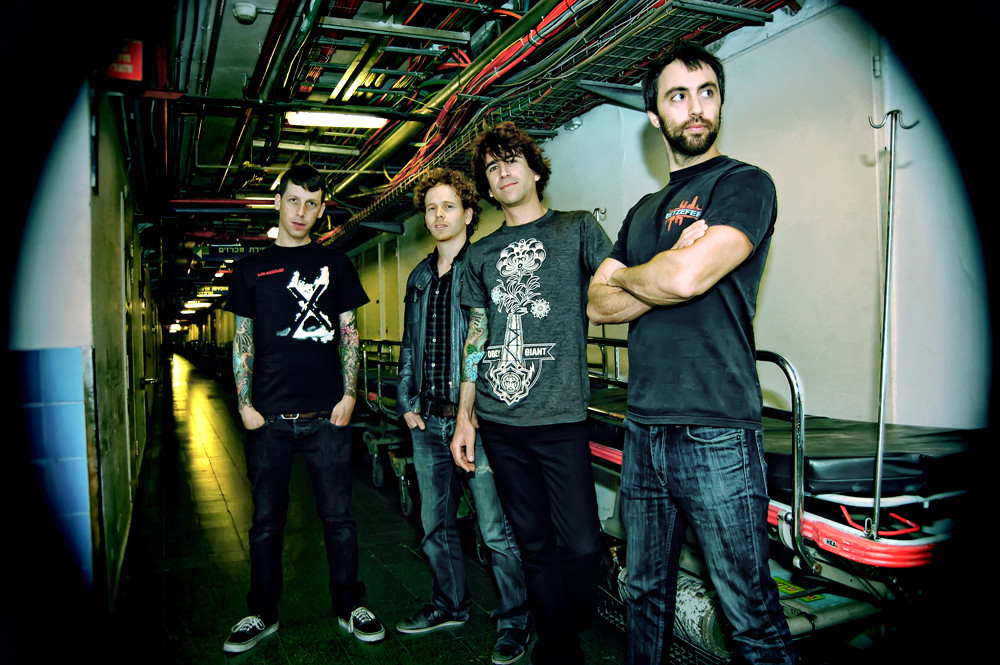 A great talk with the Israeli band, Useless ID

It’s a pleasure to be here with one of the most amazing punk rock bands of the last decade, Useless ID. So let’s start our chat talking about this amazing festival…

RP: Thank you guys for being here with me and let’s start with the first question which is something that I ask everyone who comes here: how do you feel regarding the PRH? What’s your impression?UI: what I have to say is that the way I see it, punk rock in Europe, or at least the melodic punk rock scene of Europe, there is a time before PRH and a time after PRH. I seriously mean it. I thought about it the other day because everybody’s waiting for it, people coming from all around. And this is such a shock because it’s like a beach environment, which I think never existed before in a festival. And, it’s quite in tune with the music and, you know, otherwise, I would say it’s too hippy, you know? It’s too hippy for a hardcore festival. Of course, we are stoked to be here.
And I’ll tell you, we got here yesterday after a crazy drive in the valley of the hills. And we had to get ready really quick for our acoustic show. And once we started playing, and everyone started gathering ground, I don’t know how many people were there, but it looked pretty packed for that area, I suddenly I felt in my heart that punk rock is so great, besides the music, that for me it’s the best music, the music that keeps me going, but, you know, the environment and the community of punk it really warms the heart.

RP: Yes, I saw your acoustic show, I was right behind you and it was sooo great! I know that you like acoustic, of course, but what do you prefer actually: to do acoustic shows or more intimate shows in small clubs? Or do you prefer big festivals?
UI: It is sometimes quite unpredictable. It has to do with energy and dynamics that you cannot control. So sometimes, a big show, that should be great but it wouldn’t be so much fun. Sometimes the smallest show with a few people it is like living the time of your life. And we don’t even notice that they’re drunk, on speed, we just get crazy, so it’s really unpredictable. If it was predictable, then it would be boring. You got to come to it. Like you never know what’s going to happen.

RP: Regarding the punk rock scene, in recent years, how do you think it is evolving? It is growing, it is less energetic, it is different, it is the less political, more political.
UI: I had a lot of things to say about this, but it comes to my mind this: that I feel that crowd is a little older. As I get older, in punk rock, I notice there are not so many kids anymore. There are not many 15-17-year-olds, you know, but more people, like 30-40? Yeah, people come to the shows with kids. They’re not even babies anymore. They’re like seven, eleven years old! So, I see a lot of that. Specifically, in the, I would say, melodic punk scene, there’s a lot of ‘renaissance’. People love to come and see bands that they loved in the mid-90s or beginning of the century. People come in and revisit that. Well, nobody is complaining.

RP: Yeah, for sure. Well, punk always conveyed also political message or at least it had a rebellious part. Do you think is still valid now?
UI: I think that if punk means going against politics well, punk also means that it’s against going against politics. It has to be special and unique. So, if you say the same old things and just make stuff that’s already been said, it’s not political, it gets boring. It’s been said so many times before.
I think if a young kid is listening to Conflict, maybe he can take that energy, but if they just talk like the same as Conflict, well, we already have Conflict. And here’s the thing, a good song is a good song. If you write a good political song, that’s a good song about politics. But if you write a good song about fun, it is good anyway. That’s great. And I think this is what important to me because I don’t judge how much politics are in the scene. I just need music.

RP: Talking about your country instead, what is changing and what is still the same? I had the chance to talk with Not on Tour as well, that told me some curious things. What’s your impression on the Israeli scene? I know you have a lot of musicians; you did a collaboration also with a rapper, right? And I know there are also a lot of DJs and electronic composers. So, it’s so lively in Israel!
UI: I don’t go out so much actually, I don’t know – laughing – Yotam goes out and saw more. So…Yes, I also have another band, I do smaller punk rock shows. For me, personally, I know everyone there. And I feel like I know these people, it is an intimate thing. It’s not such a crazy scene. It’s not like huge crowds and doing a show every day. It is more a show every weekend, every two. You don’t want to overdo, because the places are so small.
Israel has this thing that is causing a problem for all music and in all art. That problem is the mandatory army service between 18 to 21 years old. So just imagine all that music that will happen between those ages for decades. But they’re never there. There are either kids playing in the bands or people over 21. I think those are three very important years. I think the art in Israel is always suffering from that, whether it’s aware of it or not. Because you also, there’s this thing that’s called the Galatz and it is a radio, that’s the biggest radio station and it is the army radio. They are cool, they’re going to play us. But you cannot get the vibe… It is music for soldiers, you know, which is just something for them, for fun. Fuck music for soldiers, music for punk rockers! – laughing – But, well, we are such a minority. But we stopped, you know, bitching about it and being like ‘mad at the system’ and at the industry. It is a small place anyway, isolated anywhere. You cannot drive in or drive out. So why bother being angry with… It is what it is.
Well, we went out in the 96-97 and we started to travel and we had a hint of what it means. You cannot just play in one small place, enclosed. I always envy the bands of the UK, they can get on a ferry and going to France.

RP: What are the plans for the future?
UI: We are talking about it. It always starts with a talk. A few years ago, before we caught up the idea of State is burning, we were on tour. And we said maybe we should write a fast record because we really enjoyed playing this as fast stuff live. And with the previous album, we ended up not playing many of those songs live. So that was like the starting point and I put a bug in my head and put a bug in each head, and we just started writing songs. Now I think we’re looking for the bug.

RP: Are you writing together?
UI: He writes – Yotam – but he always said to us what’s going on, so we said this is good, this is not, maybe we had already something similar. We’re a very self-produced band. When we start, we start!

But I think there’s probably a subconscious fear in recording a new album. Because, for example, when you are recording the video, you have to play the song all day for like 12 hours, just on repeat. Making an album it is like a million times worse! You actually come into the studio, when you start to build up this shit, that is going to take days and days and days. I’m not bitching about it. I’m not saying it’s bad, but it’s just that after you’ve done the procedure many times, I mean, from the time you walk inside the studio room to the time you get the mix, there’s a lifetime span going on there. And you pour a lot of your soul in it and you probably get into some glitches with your bandmates and you know, someone’s going to get hurt like you. So, it is just better to go inside and finish it as fast as possible. But it’s good. You know, I don’t want to sound like arty-farty, but it’s like, it’s hard if you don’t suffer a bit, you know. Yesterday, when we played acoustic it felt like oh my god! Yeah, fuck making albums. Just playing songs!

RP: There’s a band that you want to see tonight?
UI: everyone! Yes, everyone.

RP: Have you had the chance to see also some beach stage bands?
UI: Yes, I saw Drunk Tank, we want to see La Armada. Blowfuse as well, they are great! Well, so see you at the Beach Stage guys and have fun!