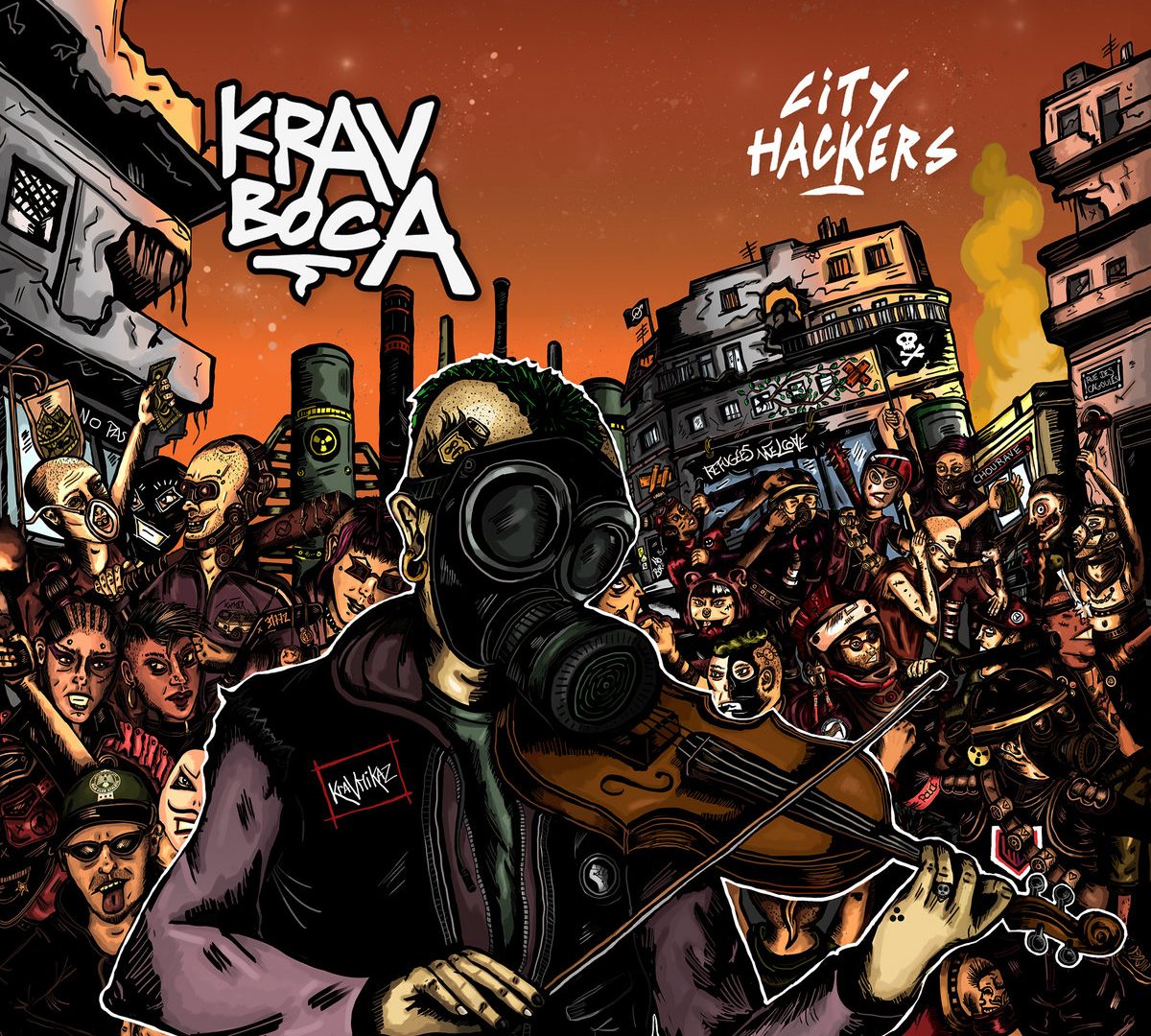 City Hackers, a transcultural and transgenerational album by Krav Boca

Many of you will already know Krav Boca, especially for their spectacular live shows. The line-up, based in Toulouse but including elements of French, Greek and Moroccan origin, is composed of three voices, mandolin, drums, bass, guitar, and a performer.

“City Hackers”, the band’s fourth album, was released significantly on May 1st, 2020, in the middle of the health emergency, and for this reason it was made available for free download on Bandcamp and dedicated to “care workers, cashiers, postmen, truck drivers, delivery men, garbage collectors, yellow vests and all those on the front line, who struggle and take risks”.

The cover artwork, made by Momo Tus in unsuspicious times, is sadly premonitory: it features a violinist who, wearing a gas mask, performs in a crowded square.

One of the main features of Krav Boca is the apparently daring mix of heterogeneous elements. Their music is rap and punk, world and metal at the same time. In their cauldron, located in the middle of the Mediterranean, different cultures and languages mix without losing their identity. To French, the main language of their lyrics, the contributions of many guest artists are added in this album: the Spanish of Chata Flores, rapper from Zaragoza, in “Souterrain”, the Greek of Speira and Zafina, respectively in “Gas Mask” and “Poison”, the voice and lyre of Aeon, Cretan musician, in “City Hackers”, the Arabic of Al Nasser in “Carte Postale”, the Italian of My Own Voice in “Crust Riot”.

The result is a transcultural and transgenerational album in which the spoken word of rap nimbly climbs both on the more traditional sounds of instruments such as mandolin and lyre, and on the aggressive sounds of distorted guitars and fast paced rhythms.

The lyrics, with their mainly vindictive content, describe urban scenarios of struggle against inequality and oppression, but there is also room for a declaration of love for an inseparable companion: the band’s van (“Camtar”). On the official website of Krav Boca there are many of the lyrics with English translation (here), and I invite you to consult them also for a reading in the light of the most recent and dramatic events. One sentence among all resounds in my head, as a prophetic answer to the question: will we come out from all this as better persons? “Le vrai visage des gens se dévoile dans la galère”, the true face of people is revealed in troubles. It’s up to you to draw the conclusions.