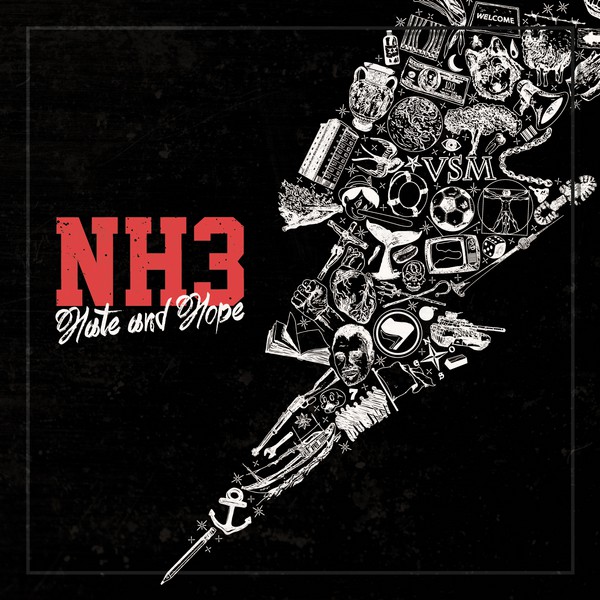 “Hate and Hope” is the fourth album by NH3, a band from Villa San Martino, Pesaro. A band which since 2002 has been doing great with its ska/core, where punk hardcore’s power and rage combine with the melody of hand up riffs and horns.
The record contains 13 tracks all making sense with catchy lines which stick in your head at first listen. Great opening with the triplet “Qualcosa Di Meglio” (one of the best tracks along with “Old School Attitude”), “No Borders” and “Berlin Calling”, which strongly introduce the record. The album goes on pretty good, getting to the top with “Old School Attitude”, a track dedicated to Villa San Martino, where NH3 were born and grew up with football matches, public housing and streetlife, where confrontation overcomes hateful racial and cultural barriers. Another great track is “Nella Bocca Del Lupo”, which thanks to its catchy refrain instantly sticks in your head. Then comes a beautiful version of “Bella Ciao”, one of the most original I have ever heard!
Finally, “L’ironia della Sorte” is the perfect closing track.
I’d like to highlight the great layout of the tracks in this album: it has an amazing start, a powerful middle and a perfect closing. The lyrics are wonderful and the issues up-to-date and clearly discussed. As the title suggests, hate must be seen as the sparkle which moves to the action for a better future for humanity, a hope which comes through values such as friendship, identity, humanity, anti-racism, anti-fascism, solidarity.
“Hate and Hope” is amazing, well done, never boring and full of personality. A great record by a band which guarantees great fun on stage!

Reviewed by T.S.
Translated by E.C.