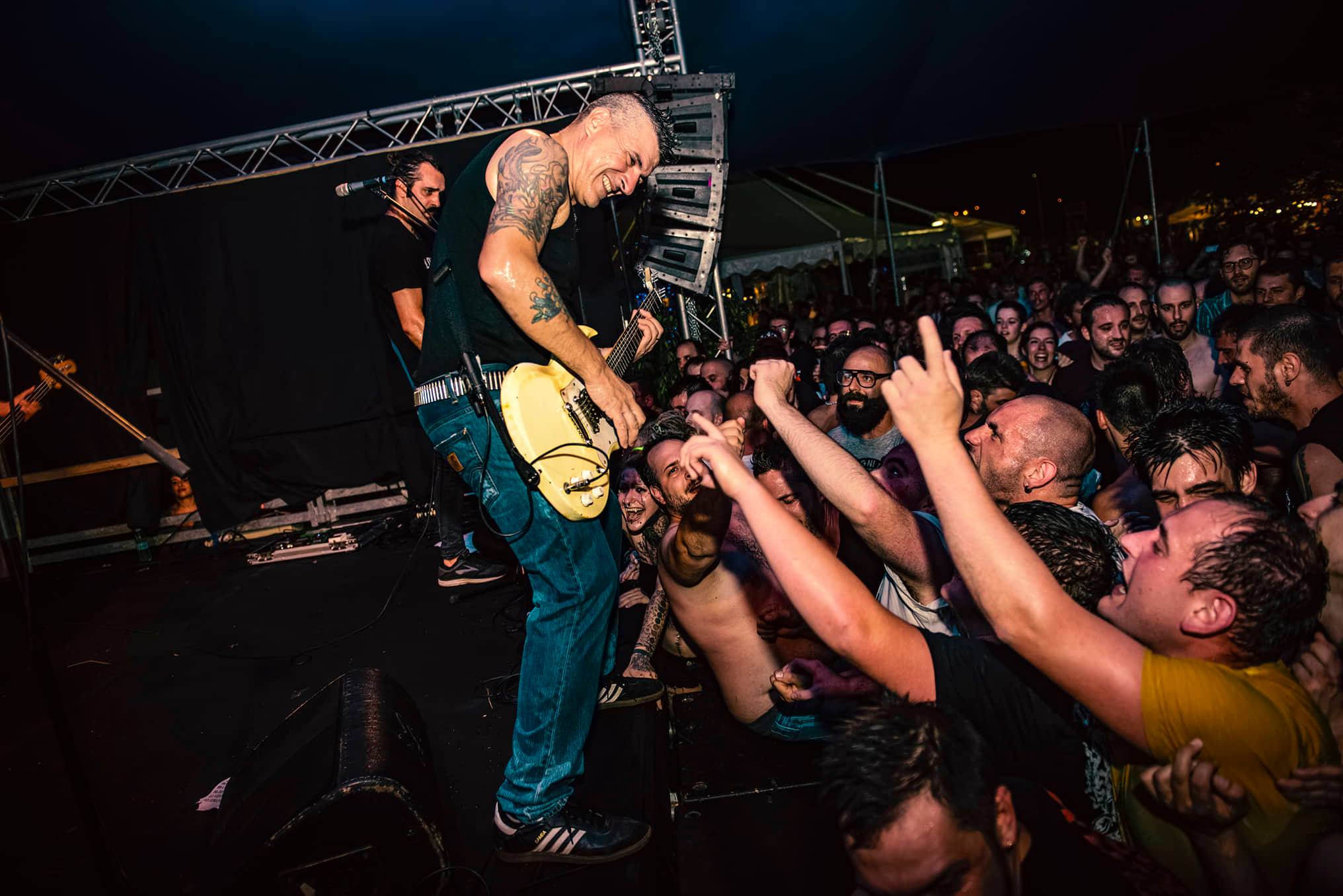 Note: this is not a usual report, this is the story of the four days I spent at Sherwood Festival, that lasts longer, offering other cool events I couldn’t go to.

Finally summer is here, we all sweat as hell and in Padua even more thanks to Sherwood and friends that always bring amazing bands to the stage of the festival and make us dance till, exhausted, the night falls.
Anyway, let’s start this tale that skips from day to day seemingly with no logic, but that of good live music.

Day 1: The Creepshow, The Interrupters and Dropkick Murphys.

Okay, I have to admit this is the day I was awaiting the most. Not so much for Dropkick Murphys that, although I always like their works, lately didn’t excite me so much live; I was looking forward to seeing the Interrupters, since I really adore them, and Creepshow, a Canadian psychobilly band that I’d been waiting for for a decade now.
And exactly this band was the one that started first, slowly attracting more and more people downstage. During a set of just 30 minutes – unfortunately – they showed the audience what they are like by playing songs from their latest album and their classics like “Run For Your Life” and “Rue Morgue Radio”. Hope not to wait 10 years more to see them again! Oh, I recommend this band to everyone: energetic, catchy sound and great determination.

Now it’s time for the new champions of WW ska-punk, the Interrupters. Have I already said that I really like this band, right? The fact is that these guys are really good: both musically, with sing-along songs that switch from a traditional ska to a more modern one, their lyrics overwhelm you, and live, with their energy, affection for the audience and a sizable technical holding. Therefore, in 40 minutes, they played a perfect setlist engaging the attendants in a way that not all bands can do. My top favorites played: “By My Side”, “ Take Back The Power” and “Got Each Other”.

Just the time for a spritz, a good piadina, a stroll here and there bumping into friends and acquaintances, when suddenly the stage turned into a cathedral of Irish punk. Dropkick Murphys arrived. As I said before, the last times I saw them live, they didn’t make me go crazy, but who knows, maybe this time they’ll surprise me like the first time, when I was 17 and went excited onstage. They started energetically with their bagpipes and guitars, but the first songs played from their latest albums didn’t convince me. I waited for something different, and slowly the atmosphere warmed up: they moved to their classics, “Field Of Athenry”, “The Gang’s All Here” and, as a big surprise, their cover of “I Fought The Law”. Also, a bigger surprise: Kendra from Creepshow went onstage to play a duet to the tune of “The Dirty Glass”. I was about to cry!
In conclusion, this night ended brilliant between sing along to “Rose Tattoo” and the power of “I’m Shipping Up to Boston”. I’ve to say that this time they gave me gooseflesh again!

Day 2: Trivel Day with The Many Grams Mother, Why Everyone Left, Blowfuse and Dune Rats

I started feeling tired on the 3rd day of gigs in a row, but I couldn’t miss this event organized by Trivel. Even this day, I greeted and drank a toast with my friends before The Many Grams started their set. I had never heard of this band before, but this was a nice discovery. Their punk rock was fine and made you move your feet “up and down”. Well done guys!

Then it was the turn of Mother, whom we’ve already talked about, and who always make an excellent impression with their “punk rock garage hardcore” (I don’t even know how to define it, but it kicks ass!). As usual, their set ended with guests on stage causing a real sound blast!

The third band called by Trivel was Why Everyone Left. I’m sure I’ve seen them before, but I cannot recall where… Anyway, their cheerful punk rock sound engaged the audience and warmed up the atmosphere of the second stage.

While we were awaiting the set change, it’s time for the umpteenth piadina – yummy! – I said my rounds of greetings and managed to get the last Venezia Hardcore t-shirt with the gondola drawing on it! Boom! And “boom” is what Blowfuse did: from Barcelona with fury, their hardcore fractures your legs! These guys were really killer! I could’ve kept listening to them for hours, and I guess the ones who were inciting frenzy downstage could have to too.

Sadly, they finished their performance and made way for the special guests of Trivel, the Dune Rats, form Australia. They were so crazy, wild, and garage punk: what more do you want? I didn’t really like them in digital format, it’s not really my music genre, but live it’s another matter. It was a big surprise!

Unfortunately, I had to leave before the party ended, but three days of concerts and work started kicking in.

I was in shape once again and ready for another week full of gigs! That hot Thursday with 38° I set off to see one of the greatest Italian punk rock bands ever, that after 30 years has never given in and still takes on the road with determination. I’m talking about Derozer, a band from Vicenza that celebrates the 30th anniversary of its foundation and the 20th anniversary of “Alla Nostra Età”, their historical album.
Thanks to Debora and Indiebox, I had the chance to exchange a few words with Seby and drink a shot of Brancamenta together – yes mates, it’s all true! Check out our Interview with Derozer here.
After this great emotion, we just have to go downstage!

Practically, Derozer are as old as me. I realized that when they took the stage and began their performance with a memorable setlist. Not a single song was missing, neither their classics; everyone was singing loud. “Straniero”, “Vento”, “144…”, pieces of history! It’s not only music, it’s an attitude, the real life, as Seby reminded us from the stage: they’ve always been there, always stood up for it. Against the clowns in our government and the ones who are just appearance, too.
With emotion, due to his words and the moment itself, I’m listening to “Alla Nostra Età” in its entire in a supersonic speed.
In conclusion, two songs we all love and carry in our hearts were played as finale: “Alla Nostra Età” and “BrancaDay”. It’s useless to say that everyone went wild!

“Rozzi”, see you next time!

There was great expectation also for Saturday night since I was going to see for my very first time – what a shame – the extraordinary SKA-P, the Spanish goodhearted and political-activist band, that has just released a new kick ass album.

The band that started off the night was Los Fastidios, another one with never-ending heart and commitment, fresh out of a new release too. They played a ska-oriented set, which I didn’t mind at all, and slogged away throughout a live set that lasted 30 minutes or a little more. Enrico got on stage with a banner that said “FreeCarola”, because “our thoughts go to the captain of the Sea Watch ship, a pirate like us”, as it should be.
The guest during their performance was Elisa, who played a duet to the tune of “Radio Babylon” before ending with a crescendo of emotions with “Birra, Oi e Divertimento” and “Antifa Hooligans”. Los Fastidios were great as always!

The second band in the lineup was Zebrahead, that for my part I didn’t know besides the famous video at Playboy Mansion… Actually, these guys brought a lot of fun and a 90’s – early 2000’s sound played skillfully. Despite this, they didn’t persuade me, maybe I expected something different from them. Anyway, seeing them jumping from side to side and the crowd being enthusiastic was beautiful.

After a endless queue to quench my thirst, finally Ska-P went on stage in front of an enormous crowd – probably this was the night with the greatest influx. As I said, I’d never had the chance to see them before, but my wait paid me back for sure. Their performance lasted about 2 hours and consisted of all their classics plus the new songs from their latest album, like “Jaque Al Rey”. Besides the music, the amusement, the incredible scenery, it was the message that gained me. It’s undeniable that the Spanish band has always conducted a strong message of protest, unity and revolution. And so we all sang, jumped, and felt closer thanks to songs like “Vergüenza”, “A La Mierda”, “Cannabis” and the timeless “El Vals Del Obrero”.
Two hours, guys, two hours of pure emotions!

And so, my personal experience at Sherwood Festival for this year came to an end. I have to say that this festival is a beautiful reality, a place that becomes a meeting point for different cultures and genres. A festival intended for everyone and that includes everything inside of it, in order to share and learn all together.
See you next time!