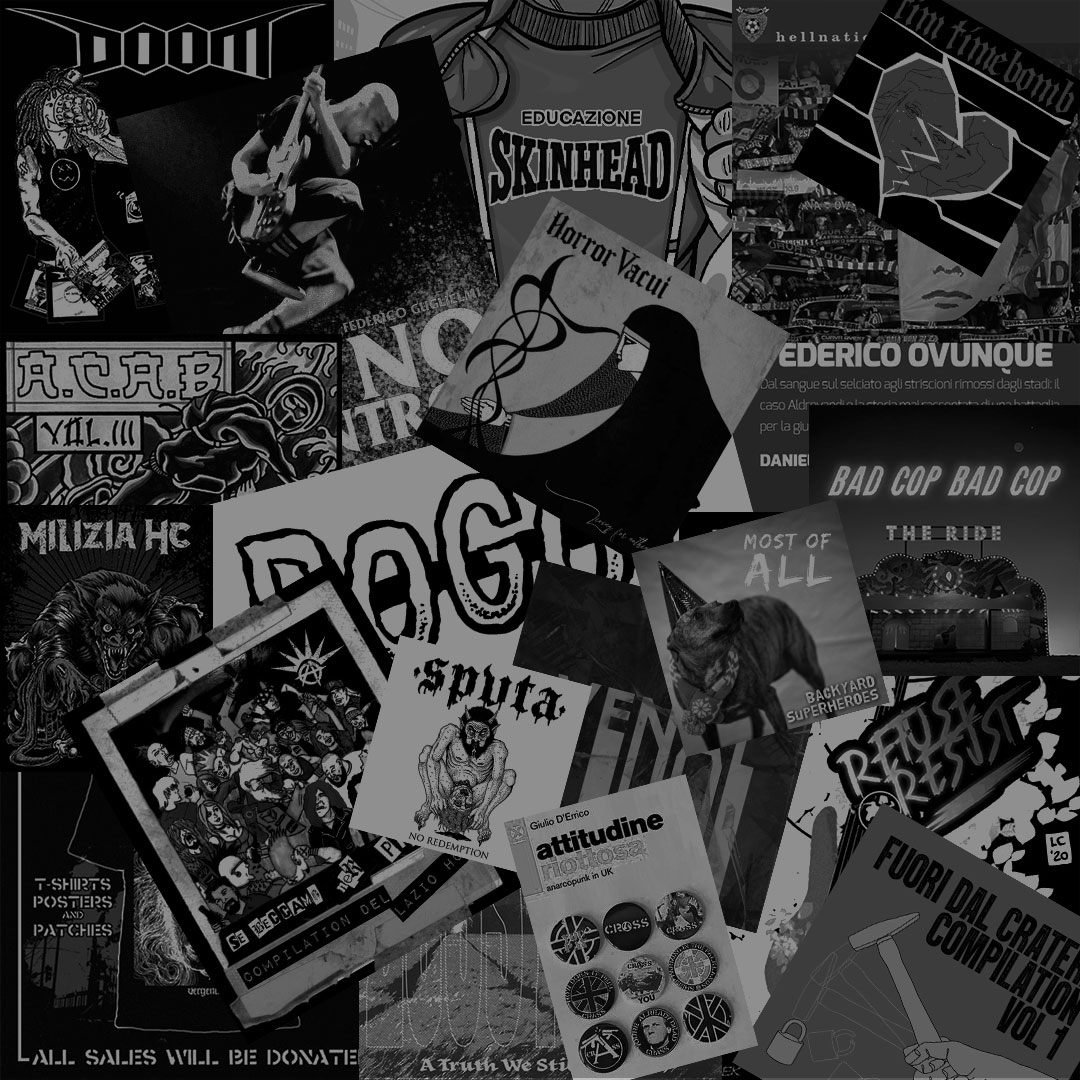 After the great success of the first meganews, that wasn’t named this way, we are back with a super running shot of punk news that we discovered and that you pointed out. The meganews will be ready presumably when you’re least expecting it (to be noticed: when we’re in the right mood), but we will always let you know, so you can help us adding something of yours or other’s that you saw and you want to point out. Before meganews comes out we will ask you via Facebook and Instagram to help us make it adding new songs, videos, singles, fanzines, projects, concerts, initiatives and so on. Follow us!

DISCLAIMER:
Punk is an attitude for us, if it was only music we wouldn’t have opened, so not merely musically punk topics are welcome – this is why you can also add Antifa demonstrations, against repression etc – if they share the attitude. Militant hip hop, Ska, blues, and songwriting are welcome provided that they share with punk spaces and values that are its basis.

IT’S IMPORTANT!
It’s cool to listen and discover new stuff, but if you can buy the physical copy to support bands and labels and if there’s the opportunity to donate each little aid is a big aid.

Swipe the article attentively because the order is random and you will find various players and more info for each name involved.

And now get ready to discover recent punk news and much more. THEME SONG! (Ah no, we don’t have it!).

East Coast Death Squad: it’s a collective more than a band that will release stuff chosen for special occasions. This project was born from a group of people who took part in the fanzine Refuse Resist and includes members and  former members of Hobbit Motherfuckerz, Straight Opposition and Capraphagos. This video’s song is included in the benefit compilation for XM24

La Inquisición: the new video for “El Himno de España”, a track included in the new album that is supposed to get out this year.

Tim Timebomb: Rancid’s singer has released with his project thanks to Wild Honey Records a 7 rpm in 4 different colours (white, silver, blue and black); incomes will be destined to Bergamo’s hospital. Here you can listen and buy it:

Ferum: to the cry of “Extreme Music is protest” the band will donate all the proceeds of its Merch until September 30th to the Communities United Against Police Brutality (CUAPB). Here you can find more info to buy shirts, posters, patches (worldwide shipping) while if you want to donate directly to CUAPB click here.

Path: Anguillara Sabazia’s ballad singer, who wrote an article published on our website, has recently released thanks to T.A.C. Records the CD + story “Small Town Boy” in extra large digipack edition (it came out during the lockdown so support it, it’s hard to go on without concerts!) A month ago the video for the wonderful “Gli Indifferenti” came out, here’s for you to get moved

Cocks: a new song for the punk rock band from Genoa. The song is titled “Full Speed Ahead” and it will be in their next EP “Arena”, to be relased in September via Flamingo Records.

Call Me Malcolm:  the English Ska punk band we interviewed some time ago is back with a new album called “Me Myself and Something Else”. Here you can watch their video with a song included in the album:

LaCittàDolente: on September 18th the band’s first album titled “SalesPeople” will be released on CD thanks to Fresh Outbreak Records, Hidden Beauty Records, Mother Ship, SHOVE records, Toten Schwan Records & Violence In The Veins. Also the tape will be produced with Trepanation Recordings. In the meantime you can listen to the first single:

O’ Misfatt: this engaging project that covers Misfits’ songs in Neapolitan dialect already dropped two songs. Now we believe that the Internet can be shut down. We hope to see them live soon. After the preliminary mark of a few shows at the worst bars of the suburbs they will get noticed for some talent shows and they won’t have any time to drink with their friends. We will miss you guys, but you deserve to play at Buckingham Palace at some symposium of good manners. Here’s to you Ramm Nu Moment (Hybrid Moments) and Si Voln’e Mman (Teenagers from Mars). New hits soon!

Zeman: from one “hit” to the next, here are the guys who go to guys’ bar and Luisa bar (they closed it for the nights – sigh). “Liberi di Cosa” is the new song that supports the comrades affected by repression during the infamous operation “ritrovo” (gathering). Listen and buy it with a minimum donation of 3 euros. Goooo!

Attack, Compilation Ardecore Benefit: three volumes of this compilation available in free streaming or download via donation on the site: www.sostieniradioblackout.org
SUPPORT!

Doom: Agipunk presents “Pretentious Arseholes”, new box set of the legendary Doom with five 7 rpm made of black vinyl, a flexi, postcard, embroidered patch, 16 page booklet. There are only 400 copies so contact Agipunk because pre-sales are open and  beware that the limited colored edition is gone and it’s no longer available! It is supposed to come out in mid September!
http://www.agipunk.com/label/ag121-doom-pretentious-arseholes-7eps-box-set/
Contact Sonarize records if you’re in Canada or US.

Pogo Zine: Kappa (Ammonia Records), Franz (Wild Honey Records), Dan (former director of Rock Sound) and the Filler collective are glad to present a new digital and paper zine about punk, DIY, and self-production. Anyone can print it and give it out, and with this preliminary remarks, you will surely find it at our stand. Stay tuned and follow the page.

Bad Cop/Bad Cop: the new album of the all-female punk rock band is out, called “The Ride” and released via Fat Wreck Chords.

Milizia HC: the band from Padua has a second life after 13 years of stop and is back with a new track for the benefit compilation XM24, called “Il Sangue dei Vinti”. Play it loud!

Backyard Superheroes: “Most of all” is the new video for the Ska punk band from New Jersey. All incomes will go to ACLU association.

Stiglitz: Genoa is back with an oi! band after years, though they call themselves turbo oi!: This young band released 6 tracks that you can find here, and “Giullare” seems to be already a demonstration hit in Genoa!

The Unborn: let’s talk again about the mysterious oi! band based on horror/sci fi imagery with good news for collectors. The label Rat Girl Records has released the cassette EP “The Last Man On Earth”. Contact Unborn for your copy!

Ecostrike: “Together” is out, the new single of Ecostrike, vegan straight edge band from Florida

Mayda (prod. Gowipe): we’ve said it in the disclaimer. If you got the attitude, you’re in. This way Mayda (40127 drummer) gives us in da face “Viva La Raza”, a great hip-hop track; the video features known faces from the skin and punk scene! “10 on stage like Wu Tang, but with Peroni, zero kings only boors” .
Peroni is an Italian brand of beer.

Fake Names: members of Minor Threat, Bad Religion, S.O.A., Refused, Dag Nasty and many more gather to create this supergroup. The line-up includes Michael Hampton, Brian Baker, Dennis Lyzxén and Johnny Temple. In case you missed their s/t album that came out in May for Epitaph here you can have a taste and watch the video for “All For Sales”:

Sputa: the new album by Sputa, a band from Berlin dedicated to metal hardcore! 9 tough track that came out thanks to the support of a solid DIY conspiracy by several labels (Fresh Outbreak, Goodwill Records, La Agonia de Vivir, Abnegat Records, Passion Means Struggle, Sedation Records, Mastice Produzioni and Choices of Your Own Records.). Here’s the album and the video. Recommended!

Strollad: new video for the French Ska punk band! Watch and listen to “L’Arnaque”, that announces the album coming out on September 11th

Hollow Lies: the new album “Live in Studio” came out for Duff Records

Compilation Fuori dal Cratere: in this compilation by the collective fuoridalcratere there are all the bands that played for the benefit for Amatrice in 2017! Listen to it:

Lesnar Suplex: very tough hardcore where being a dumb show-off doesn’t add anything Good for fans of NY hardcore , support but don’t be rude under the stage eh! Listen to the new album “We Are The Horde”

Horror Vacui: new album via Agipunk by the historic death rock band from Bologna called “Living For Nothing”. You like it or not, listen here:

Wild Sheep: the band from Vicenza has its own style, it has been one of our first coproduction and it’s simply unique. This is their video for their first track written in Italian:

Bag Of Snacks: newborn but they already make our ears bleed. I got their side silkscreen printed LP, it’s a chic co-production by Flamingo Records, Rockout Fascism, SFA Records, T.A.C. Records and Little Mafia Records. What do they do? Come on listen, no prejudices for bands of this kind!

The Manges: the historic punk rock band from La Spezia will soon release their “Punk Rock Addio”. Meanwhile the band puts out a single in 7 rpm with two tracks, Endless Detention and Ramones at Lollapalooza available in 400 prints on black vinyl.

Morgana: Florence has a new post-punk group. Kinda strange that Ivan Dunga is involved. Since he is the King Midas of Florentine punk rock, it’s gonna be cool.

Se Beccamo Ner Pit compilation: xUnitedx project has reelsed this compilation that joins forces of hardcore teams from Lazio. It’s for all tastes!

My Own Voice: “Exile Underground” is the title of the new album or better, cannon shot by the hardcorers from Milan!

Blowfuse: the charismatic Catalan band has released a documentary mini-series about “Making Of” of Daily Ritual, their latest album, which came out in Italy for  Epidemic Records. A really interesting “behind the scenes” for a band that to say the least is dominating the punk rock scene. Their support tour for 40 years career of Bad Religion has been postponed to 2021, as many other live events. Meanwhile, enjoy this mini-series!

Rooftape: “We Salute You”, first EP by the punk rock band from Milan is available!

Viboras: seven songs written by Viboras, recorded in a DIY way by more than 40 Italian musicians. It’s benefit for PLAN International Italia Onlus with a minimum offer of 5€, also today you drank one less beer and you donated one more smile.

Le avventure di Timmy Contastorie: Here’s to you the first audio episode from the book “The adventures of Timmy Storyteller” written by Capitan Karl Lee, soon published by Edizioni Underground.

split zeromila/orsetti: 10 tracks here, 5 each for these two bands from Padova that self-produced everything. Starting from the great Zeromila who play melodic hc to the rough hc of Orsetti. There will be a good engaging story to tell but we will talk about it in a future article

Death By Stereo: the new video by the Californian band is out and it anticipates the album “We’re All Dying Just In Time” that will come out for Indecision and Concrete Jungle Records.

We’ve come to the end! If something is missing or you got constructive criticism to give us, write in the comments or at info@radiopunk.it

Thanks for your support!