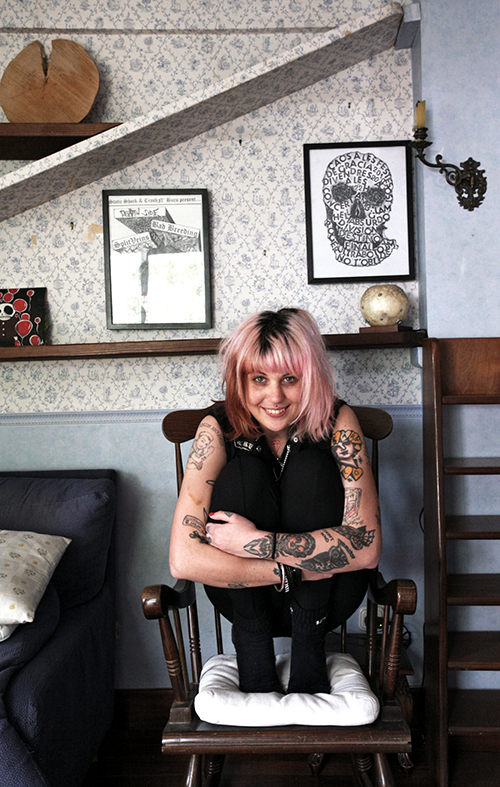 Young, Loud and Snotty is the title of Dead Boys’ first iconic record, recorded in New York City in 1977.  For this reason I decided to name in the same way my photographic series of portraits of the independent music scene.

The images you see here are a selection focused on the DIY punk scene and take in consideration the ethics of “Do it yourself”, a way of life similar to non-commercial punk (but not only). Considering that DIY thinking can be applied to all aspects of our daily lives, in contrast to the dominant society, we can define it as a tool for the creation and dissemination of ideas, practices of resistance and self-management through different forms of expression, including music.

The people I photographed are people I crossed along my path: bands, visiting people who were staying overnight in my house or faces I’ve seen since I’ve been frequenting concerts. The idea was to make static portraits with a fixed background, which I had to modify often considering my frequent and obligatory change of residence.

Once completed, the series of musical portraits includes about 30 photographs, in total I can’t tell how many people I’ve photographed, even less how many I asked. The images can be seen on my Facebook page Chiara Srebernic in the album entitled “Young, Loud and Snotty”.  I don’t exclude that the series will continue, whenever possible.

The song I chose as my soundtrack is called “Intzak/n higatik“. Drawn from the new record (released in recent weeks) “Working class pop” by my friends Oki Moki (Euskal Herria), it means “Do it for yourself ” and it refers to DIY ethics.

Article and photos by Chiara Srebernic