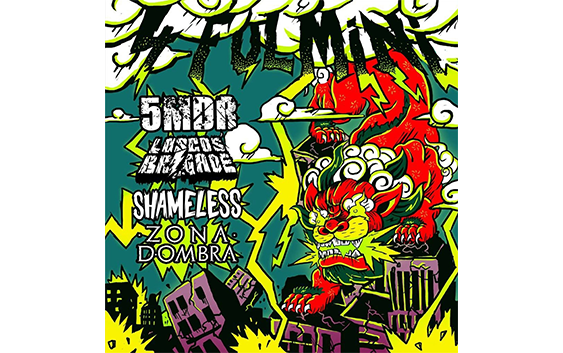 No title could have been more appropriate and representative for this record, as the ancient Romans said: “nomen omen”, and so it is… because the songs that build this four way split 7” vinyl are four ferocious and destructive lightning bolts, four lightning bolts in the tormented sky of the national punk scene panorama. Four bands and four songs for (unfortunately) a couple minutes of preeminent and intense listening.
Side A’s seals are broken by 5MDR, band from Liguria, with “La giostra del potere”. Beautiful song and beautiful lyrics, a mix between HC punk and oi! which reminds me of the French The Decline! Up next a speed up with Loscos’ Brigade, Bifolco’s band who also takes care of the record’s cover and artwork, which hit the target perfectly with “Grigio”, tupa tupa hc, rage and bitterness.
On side B Shameless do not disappoint, “Ancora in silenzio” is their song’s title. Sincere, direct, Hc, what we will simply call a club in the teeth.
Last but not least Zona d’ombra give us “Tensione”, fast and precise song, with grinding drums that cannot leave anyone indifferent. A perfectly successful experiment, four lightning bolts, four targets hit, the only thing left to do is turn side and start over again.