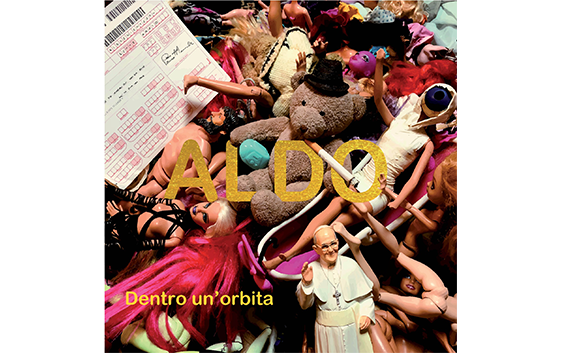 Catchy sound and rhythmic music for the Turin guys Aldo!

Certainly peculiar, Aldo comes out with their second album, coproduced by Scatti Vorticosi.

The new album name is “Dentro un’orbita”. The first listen is exactly like being sucked inside a vortex of originality, especially in terms of sound and musical arrangement.

Turin band, active since 2013, consists of drums, guitar, voice and synth; it is precisely in this last one which resides the creative ascendancy of the quartet. It mixes in a captivating way the classic harsh sounds from punk with a “light” electronic sound which tends to lighten up.

The cover of the album, with its random stacked objects, almost seems describing what it actually contains, a cauldron of different sounds and influences, in some you hear more one than others, but overall pleasant and well done.

In addition to a reference to post punk sounds due presence of keyboards (don’t hate me artists), on a closer listening, you can’t ignore some guitar laps with heavily funky, rock’n’roll and reggae influences. This, together with the female voice, pounding drums and a bass that from time to time is pleasantly played, creates a unique and catchy atmosphere.

Clear example of this well done mix is 40%vol or track 6, exciting and snappy/sprinting, music that in conclusion makes it hard to stand still on a chair.

Overall, an album that undoubtedly deserves listening, even from those less passionate of this genre and a band definitely to keep an eye (or an ear) on, as it can have interesting developments.