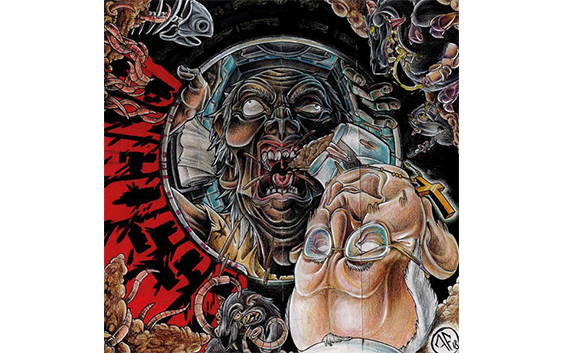 From Veneto with fury, Angossa just put out their latest musical effort, an eight-track album of harsh old school hardcore.
The record starts at full blast and there’s no time to rest till the end, the songs just flow by between a blast beat and a mid-tempo, breaking bones and eardrums.
There aren’t songs that stand out from the rest, except for the last one, which sounds a bit different from the others. Not being a huge fan of inhomogeneous records, I really appreciated it.
The riffs are classical Italian hardcore punk, the guttural vocals mixes really well with the instrumental. Furthermore, the rudimentary production gives this album a very particular sound.
If an oenological comparison has to be made, rather than a Brunello di Montalcino, this record is a Cabernet on tap, one of those cheap wines which don’t really bother appearing, but that really make themselves being appreciated in the right moments.
Beyond the alcoholic aspect, this album is real bomb, that fans of raw, unpolished punk are really gonna dig. For those who have a more sophisticated taste, give yourself some time to enjoy it.
In the end, it’s a record that, beyond the appearence, I really enjoyed, and I’d definitely recommend to anyone who’s into Italian (but not only) hardcore.