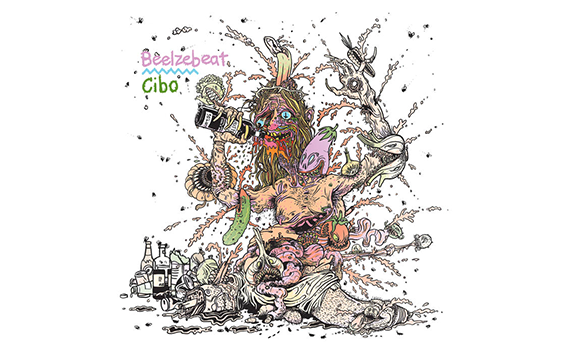 It‘s been months that I was looking forward to listen to this record, and to review it too. Hears up motherfuckers, here’s the Beelzebeat/Cibo 7inch split EP.
As hors d’oeuvre, let me introduce you to Beelzebeat: hailing from southern Padua, they ‘re such as an hybrid creature, like a nouvelle-cuisine appetizer. So imagine yourself in the woods, picking up your favorite vegetables to prepare your recipe. Take them all in your basket! A handful of Patareni, Noise-a-Go-Go as long as it takes, a sprinkling of Demented Are Go and a full glass of Cramps, to high heat. Then open a bottle of cheap beer and pour it on, that’s grindabilly, ladies and gentlemen! Brandishing their WC like a club, they’re on us with two brand new and previously unreleased tracks! Filthy, guttural, excessive and mesmerizing. In one word, extreme! Losers is kinda an inbred between The New Bomb Turks and Disrupt, and it dumbs us enough to deliver us immediately after to the bipolarity of Born to Booze, Live to Grind. Those two new tracks are even better than the one that went on their previous 7inch split with the Japanese Kamisori. Face it, Beelzebeat are easily one of the best band now active in Italy, and everyone who has seen them live knows what I’m talkin about.
On the other side, Cibo don’t need no introduction, I hope. Born in Turin, they deliver us extreme sounds since fifteen years. Moving their first steps with two albums that have become iconic, like Appetibile and Ignorante, where they shredded a manic and bizarre grind-punk assault. Year after year, they have kept adding and adding tons of multiple different influences to their sound, landing to a complete unique and personal sound, alternating growls and distortion with melodic and sometimes even dissonant tones. With this record, more than a “back to the roots” operation they made up a synthesis of everything they have created and invented. They kinda summed up their very personal blend, delivering two great songs that will stick up your brains like glue! They even got some great featurings on! In the first song, Transustanziazione, there’s a “collaboration” with the voice of the pope Benedict the XVI – a.k.a Joseph Mengel…ehm, Ratzinger, you know – and in the second one Sul Mio Tagliere it’s the voice of the unholy Prince of Darkness Mike Buongiorno himself to guide us in an interesting journey into vegetables world. The ending crescendo is a pure perfect sing-along and throat-ripping tune, period.
This pocket guide to the obscene will be equipped you on vinyl thanks to the common effort made by Distrozine, ZAS Records, Finte Platte, Pasidayk Pats, TADCA e Uroboro Association, and it will be celebrated with two different release parties, in Piedmont and in Veneto, on the 27 and 28 of march.
Are you still there?! Go buy this fuckin record, you lot!

Listen to the full album stream on Bandcamp:
Beelzebeat Side
Cibo Side