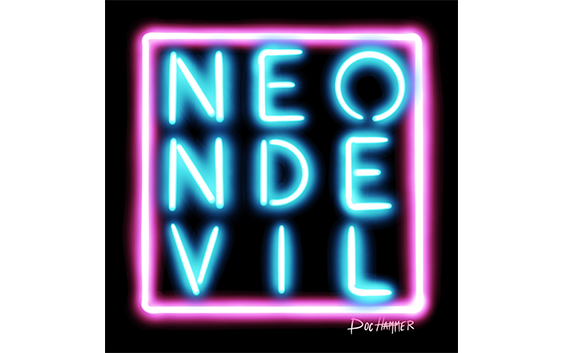 From the hot and sun-bathed California, we get hit by a beer can fueled party bus!
Nothing but a relentless party commando who just wants to get us stoned and tanked with a wall of sound made by heavy, solid and fuzzed-as-fuck guitar riffing. Doc Hammer‘s only aim is to melt our brains out, bringing us in an excess labyrinth, deafened by an insanely loud volume and numbed by smoke. The punk fury of the singing merges perfectly with southern rock influences and with the wildest rock’n’roll sound. Twelve sweat-soaked tracks, like the worst famed small clubs. Twelve episodes in which Doc Hammer introduces us in their own haunted house, where every door opens on everything bizarre and weird. Since from the very beginning, the record speaks loud and clear: a one-two, straight to your jaw. Violent and snotty like Hevy Drugz, the opening track. This is just an appetizer. We try to regain our posture after the first punch, but Doc Hammer have already led us to their parallel and paradoxical universe, and we only need to hear the gloomy organ in F.I.T.Ba.P. to get trapped into it. From now on, there’s only oblivion. We don’t even realize that time is running, deafened by riffs. We just want more. It’s like Ass-Cobra-era Turbonegro got their instruments tuned lower. There are so many other influences in their sound. We can easily hear some noise-rock features that remind us of bands like Unsane, and there are even some obvious heavy metal influenced moments – just like Winter Girlfriends and Funders. Exactly like when you’re at a party and you make yourself a drink and you add even more liquor to get it stronger, Doc Hammer just want to exaggerate and not know any limit. They hit the accelerator, riding a car pointed at a wall, high volume stereo, blood-red eyes and a grin printed on their face. Spit the Claw seems to end all hostilities, but the bartender has poured you the last shot. A ghost-track like the heaviest liquor in the house, the nail that is going to pierce your temples tomorrow morning. But we’re gonna think about it tomorrow.