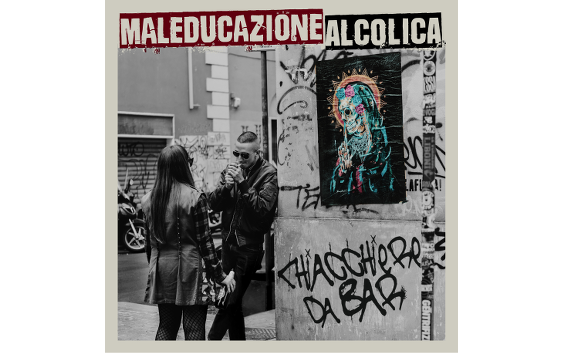 Those who live or have lived in a small provincial town are aware, in their daily lives, of the images, sounds and smells of village life. The bar, nerve centre where the same faces always meet, the old people playing cards blaspheming, the men drowning in alcohol the umpteenth love disappointment, the improvised fights and football matches. And at home, mothers waiting awake praying, church bells ringing. The patron saint’s day, the party dress, the music, the dances, the bizarre character that everyone points out as crazy. The smell of smoke and stale of bars, the smell of cotton candy and wood burning in the fireplace…
This is what Maleducazione Alcolica pour into your glass, from behind the counter, with their fourth album, “Chiacchiere da bar”, featuring illustrious colleagues such as The Rumjacks, Punkreas and Gli Ultimi. A sweet, nostalgic return to the past? Not really. Because what’s left in your mouth is the bitter aftertaste of the anger of those who live in that village: the sense of revenge, the desire to escape from mediocrity, the rebellion often accompanied by a very different music from that of the festive day, four angry guitar chords that project you into the big city, into the promise of a better life.
The narration is punctuated by the rhythm of the classic ska-punk to which the guys have well accustomed us, with some unexpected changes: from the rock’n’roll/swing in pure sixties style of “Rude’n’Roll” (you can see the video here), to the old-fashioned punk rock of “A me mi piace il punk” and “Convinto e vinto”, number one in my personal chart of this album, to the rock ballad with a nice guitar solo at the end of “Senza pietà”.
And, to close in beauty, a nice “Borghetti”, a song already released as a single last year and present only in the physical version of the album. It’s on the house.