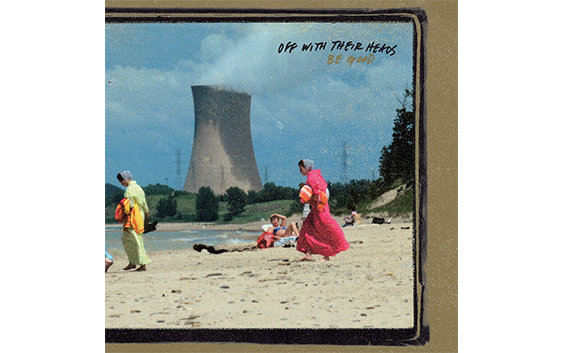 No, I’m not crazy, Off With Their Heads’ new record hasn’t sold and will likely never sell 1000000 copies, but I think it could have done this during punk rock, grunge (yes, grunge!), and post hardcore’s golden era, back when music was actually bought and records were made to remain in people’s memories, not just as a distraction between an Instagram photo and another.
But first, let’s go back a little: talking about this band is never easy, not without stating that despite their appearance and style, I refuse to label this band as “Orgcore”, a stupid and useless term used to describe a bunch of bands that proposed this kind of sound in recent years. Punk rock’s already lacking good bands and listeners, there’s no need to create other pointless subgenres. This is a punk record with grunge influences, as simple as that, also because Be Good speaks clearly by itself and gets right into the square of masterpieces without even passing Go.
Until today, you could easily describe my relationship with Off With Their Heads like this: “beautiful songs, but a very repetitive sound that always ends up boring me”. All of this was wiped out like a line in the sand as soon as I heard Be Good, a mix of devastating singles, choruses that are desperate without being overdramatic, muddy guitars that finally reached the right mix of sound and fantasy in riff writing; never as in this album they were able to make my head move (you will die) and get me really emotional (severe errand). Ever since the first single Disappear dropped I got super interested and patiently waited for the full album release, and when I finally gave the whole record a spin, I couldn’t help but fall in love with it.

With hardcore sounding outbursts such as No love, this album spaces from straight forward but very moving drum lines to classic American folk-rock kind of songs like Take me away, which slowly drives us through lonely roads on a sunny spring day to northern maple forests. Tear me apart is a classic Off With Their Heads song, the second guitar is Trash it‘s strength and it makes you want to play it in the rehearsal room with your friends. Let it all is straightforward and devastating, with no real weaknesses. Lastly, the 2 minute long instrumental track Death sounds less aggressive, you just have to close your eyes while listening to it to imagine the band playing in a basement with the good old lights hanging from the amplifiers and the ever-present cheap beers, while everything fades away with bitter tones and you’re left with the desire to turn the vinyl around and give this 11 track journey another spin.
It seems that Epitaph is slowly starting to release quality works again and, to do so, it’s rightfully relying on bands that have been playing for a long time but failed to reach the mainstream success only because of how risky it is to make rock music in (almost) 2020. For now, let’s take advantage of the fact that the music industry is leaving these genres alone and investing elsewhere, instead of ruining records like this one with its poisonous mainstream success. So run to your local record shop and have a good listen.

Reviewed by Nick Northern and translated by Teo and Alessia Baraldo.