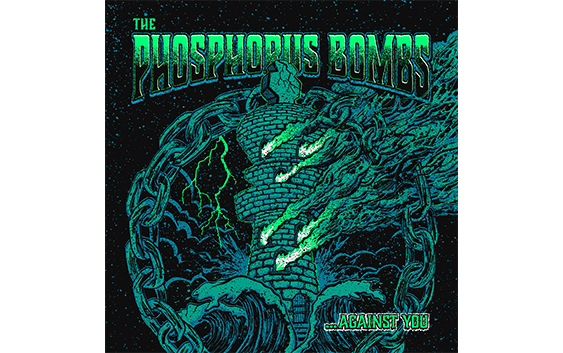 Recently I had been listening to the same two or three CDs in my car stereo, kinda bored blablabla. But suddenly from the front line of  Radio Punk’s journalistic editing, I was swept up by a real shock wave! A real goddamn bomb! A really great new listening that opened up my musical stomach, making me hungry like munching chips with the very first beer of the day.
From the distant Australia, here come the bombs! The Phosphorus Bombs are five dudes based in Sidney, although they’re spanning continents, bonded and linked together by the common denominator of punk rock and its very own expression and communication skills – even when deep distances are between them.
They formed in 2014 and never gave themselves peace since then. They have already released five records – four EPs and one album – keeping on standing out with a gritty and enthralling sound and with a deep regard to the lyrics, often politically oriented on all those holes and shaded areas that our so-called democratic and developed societies try to hide under the carpet. All of this always conjugated  in a personal key. In my case, they really break through an open door: one of the things that really make me fall in love with a band or a record is the lyrics’ side, abso-fuckin-lutely. In particular, this record feels like they’re sitting in front of a mirror, thinking about everything, about themselves and their alleged certainties, somewhere between irony and self-criticism. All this conveyed by a sound that perfectly sums up different elements from different influences: from the latest and mature Propagandhi (they kinda remind me their Today’s Empires, Tomorrow’s Ashes era), to the latest Satanic Surfers records. Never even retreating from punk’n’roll attacks that make me think about their countrymen Jed Whitey (another huge band!) and even from a ska hint, as we can hear on Past Tense. All the different parts are in perfect balance, just like the parts that mix up in a well-mad cocktail, from the frenetic urgency of the hardcore to the enthralling charge of the more melodic moments. Honestly, it’s absolutely hard for me to pick up a more outstanding track among the seven songs of this EP; in this record there’s not a single moment that lacks of intensity: the title track Against You and By Product will end up melted on your brain and ears, fast, powerful and catchy. Even while I’m writing these lines I’m blasting them again and again, and so on, although maybe my favorite track of the record is Relief, Empathy and Compassion. An actual musical hand-grenade. I’ve already put all their records on my Discogs wish-list, and this record won’t easily get out from my speakers soon. Get yourself bombed!