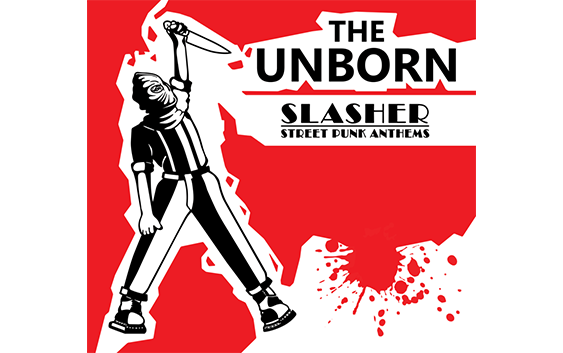 On my way home, I find a bloody piece of paper in my mailbox. A cryptic and scaring message came to me. The Unborn, a band shrouded in mystery, just contacted me. Just imagine the sentence, in case I didn’t write this review in a week, freezes the blood in my veins. *
Just like that, I find myself listening to the new record from The Unborn titled “Slasher (Street Punk Anthems)“. After my first review of their EP “Apoi! caplypse” here I am, listening to the band from Viterbo with a digipack in my hands.
Before I start with the review, I feel obliged to quote everyone who decisively contributed to the making of this album. The recording, made by Fear No One Studio, curated by Emiliano Natali (mix and master too), Angelo Vernati (who is also the producer) and Francesco Tomei.
The artwork was made by Alessandro Aloe (Moriatry Graphics), the pictures were taken by Michela Midossi and the layouts were made by Crombie Media. The artworks and the general visuals really deserve a moment of appreciation. They’re of very big impact and can almost give you an idea of what you’re about to hear on the record. Worthy of note is the “The Unborn Mail Murder” too, which comes with a series of drawn-on horror movies related accessories, together with a caption and a beautiful cover art, that portraits a skinhead with a knife wearing a “sack mask“.
Released by Skinhead Sounds, the record is made of 12 tracks, that intentionally take us into an imaginary horror/thriller scenario. Taking their cue from a couple of well-known movies that included some very important messages that are -rightfully so- resumed, the band writes their lyrics in a social and political key, linking politics to horror movies.
Musically speaking, we’re looking at a very original kind of Street Punk, both riffs and solo are of fine workmanship, power, speed and rhythm changes, all combined with a great sound quality. The vocals here are the real gem: powerful and solid, mixed with the atmosphere given by the instrumental section, truly makes you feel like you’re in a real life horror movie.
The album contains 3 instrumental tracks (“Slasher Trailer 1“, “Black Cat” and “Slasher Trailer 2” – in order: 1st, 6th and last) and a cover of “Degenerate” by Blood, one of The Unborn’s favorite bands. The other songs refer to many crucial movies for their political and social commentary as it’s evident from the Tracklist. “Terrore Dietro lo Specchio“, “Non aprite quella porta“, “Profondo Rosso“, “Solamente Nero“, “The Warriors“, “L’ultimo Uomo sulla Terra“, “Videodrome“, “Ecologia del Delitto“.
In conclusion, this album as well as the last EP is something absolutely unique and peculiar that I really feel like recommending. Not only to street punk and horror lovers, but to whoever cares for social issues (since on this record, they’ve been treated in a magnificent manner) and to whoever feels the need for a powerful punk rock record, that still feels very much melodic and particularly inventive.
I’ll stake a penny on the fact that, with the physical record in your hands, you’ll begin to meticulously study the booklet. If you’re not an affectionate of horror movies, it’s a great start to learn to appreciate them, and to start loving street punk.
Going back to the introduction… The review has been written, but I’ll keep watching my back. Also because after listening to the whole thing, I feel like I was in a horror movie.
The Unborn GO!!