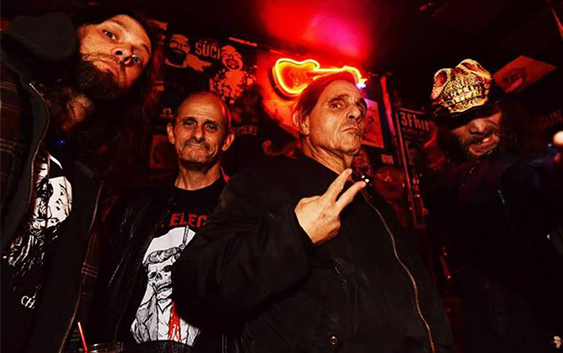 Hi everybody, I start with saying that it is a great pleasure to have a chat with legends like you. How would you introduce yourselves to those few who still do not know who you are?
I am David Dictor, I am the lead singer and I work with a lot of the lyrics for Mdc. MDC’s longest time players include Ron Posner, Alschvitz at times bassist Franco Mares and Mikey Donaldson. MDC’s current bassist and guitarist include Mike Smith and Russ Kalita who both been playing .12 years and 8 years in the current era. MDC has had up to a dozen or more people who put in a year, two or three with most on at least 1 or 2 albums. MDC has performed dozens of dozens of political fund raisers. We have raised money for prevention and shutdown of nuclear facilities, many animal rights causes,feel the need to communicate through events and actions here and around the world. MDC started as individuals who wanted to be in a punk band that expresses political thoughts. We were and are frustrated with the status quo concerning hunger, poverty and equity of resources for all the world’s citizens. One in five of the earth’s population suffer from malnutrition, hunger and starvation. The world and the United States spend trillions on war,the military and it’s complex web of death merchants while stealing and plundering the worlds wealth., with perpetual fear monger omg to spend more and more resources. Diseases like cancer, hep-C / liver disease, and Parkinsons affect and kill millions a year. G-nome research goes underfunded and preparedness for more and more war. Is never ending. We write politically charged songs concerning these topics that we feel must be addressed . The Multi-Death Corporation describes the mindset of those that push for war and weapons. We discuss the corporations are the same as people and are allowed to donate unlimited amounts of cash so they can buy elections. How is this allowed? Why do the police have so much power? Why we think that this’s so dangerous. How big business use the police force as their private enforcement tool to keep control…on Natives, minorities, on workers, … how the military industrial/borglike/complex keeps us in a continual state of fear, and how the violence the police use maintain firm control. How corporations like McDonalds accomplish no.1) the destruction of rain forests to grow more grain and raise cattle. 2) for large amounts of grain to be fed to the cattle and how it takes 20 times the amount of grain to create a pound of meat protein compared to plant protein. 3) for a limited amount of people to be billionaires while so many own so little. 4) Propaghanda to be successful to have citizens feel they need this 5)reenforcement through commercials to sell it over and over. So we have billions and billions of burgers sold from slaughtered cows , fed by grain raised on dead rain forests … We want to promote a plant based food supply .As well to protect and leave animals alone and to switch to a plant based diet so that everyone in the world can afford to eat … the opposite promotes haves versus the have nots, as well the murderous barbaric nature of harvesting 70 billion animals for the meat industry a year is unsustainable as it is unsustainable. It causes pollution and uses large amounts of water,and energy and it is just plain ugly and wrong.

Let’s explain your name: MDC. What is it the acronym of and what does it represent?
Mdc is an acronym standing for Millions of Dead Cops that support and protect the Multi Death Corporation to serve the Millions of Damn Christians at the expense of Millions Of Dead Children.

We know that with The Elected Officials you are making a documentary entitled “Anarcho Asia”. What can you say about it and when will it be released?
I know they are making a documentary that spotlights bands in Indonesia that are helping their societies by directly feeding people and taking care of needs in crisis situations. also highlighted are Japanese punks that have and are rescuing people near the nuclear power station where radiation levels are very high. Getting people to safety. I believe Rebel Riot from Burma (Miramar) are featured as well as their work as compassionate punks promoting a nonviolent path of living in a society where Buddhists and Muslims are clashing.

How was the intense tour you had in October? Do you already have new planned dates?
Going to Indonesia and Malaysia was intense … poverty w an incredibly strict Moslem government… USA tours much less intense for me… but as for crowds….Texas has the hottest scene in the country Just finished the tour a few days ago. And yeah January 18 , 2018…we have a 5 day Cali run and then off to Japan for 10 dayside Jan. 25, 2018

When a new visit to Europe and even Italy maybe?
We are working with Guru Renato of Neid about my book coming out in Italy and also gonna finish the mdc acoustic album which also might be released in Italy. Also an August DRI/MDC … I can’t sit still.

What does it mean for you to play punk even today after all these years?
It means the for me the exact same because we are still in the same place. Pollution, lack of fairness economically … heck just subtract Reagan and add Trumpf ….Punk is the message. We just released Mein Trumpf. It is punk. So yes I’d say it’s punk.

What would you say about your latest record “Mein Trumpf”?
Here’s the first review I saw by Vice Magazine from NYC:
“MDC – Mein Trumpf
Returning punk legends MDC are back with Mein Trumpf, their first full-length in 13 years. Forming in 1979, MDC were amongst the very first US hardcore band, and have an illustrious history in the underground punk scene. Consistent advocates of gay, trans, animal, equal-race rights, MDC have influenced and worked with some of the biggest names in the genre. The band have just returned from a seven-week UK/EU tour, with further tour dates to announce soon.

Let’s face it, if there ever was a time for us older punk rockers and those of you new to the movement, now is the time we need turn the words into action. We have been eagerly anticipating punk albums and songs aimed at America’s new shame, President Tr*mp. It has taken legendary anarchist punkers, MDC to release the very first anti-Trump album.

Opening with the magnum opus on this album is the lengthy title track, Mein Trumpf. The song is epic in scope from the overlay of Trump’s ‘build a wall’ speech with a Hitler speech at a rally. The song moves from a laid back, almost ballad like section to full on rockabilly to punk rock with lyrics full of pokes at the narcissistic man himself with the constant theme of “What the Trump is going on?” Attacking everything from Trump’s fake news to the lament that the ‘weak are supporting the strong.’ It is an epic effort that is accessible and thought provoking.

Next up is Working For Satan where MDC speed it up with fast paced drums, chunky guitars and the vocals fully up front in the mix and that helps the lyrics take on a prominence that they deserve. MDC are as angry as they were when I first saw them support the Dead Kennedys in the early 1980s and they remain as relevant as ever. Muscle Cars takes on the banal small town jock culture and has an almost jazzy feel at times but certainly with a hardcore edge

Drones is a full-frontal attack on cowardly drone warfare with intricate guitar and drum work and, like most tracks on the album it changes approaches allowing MDC to weave in different tempos and musical approaches to support the pointed lyrics. On Haldol a spiraling guitar lick is supported by pounding drums and the song has a menacing tone followed by the truly excellent Just For Today. Here a powerful punk riff supports a superbly clever lyrical approach with verses based on an AA introduction and choruses full of hope and optimism – it is one of the top punk rock tracks of 2017 in my mind!

The 7th song of the 12 on this release is Don’t Open The Door with another attack on the immigration authorities and their door-to-door search for “illegal immigrants” – don’t open the door is sound legal advice set to a punk rock backing track. Mouth Full Of Gimme is a full on hardcore effort suggesting that the way to live is to give and attacks the “first to take, last to give, live your life like a sieve” individuals out there who take advantage. It sounds like a personal story and the boys sound angry!

MDC continue with the broad based attack on many subjects that clearly piss them off with My Show, where an almost funky/ska beat supports scam artists in the music industry, banking industry etc. Product Placement with a humorous introduction that develops into a real hardcore rocker attacking capitalism and the “Buy now” culture. The penultimate track is just in time for the holiday season and the Merry Fucking Christmas intro falters to deceive as it is replaced with a fast paced punk rocker lamenting the plight of the poor at this time of year.

The album concludes with a renewed recoding of the Born To Die, No Trump, No KKK, No Fascist USA that has been heard at Green Day gigs, Antifa rallies and other anti-Trump rallies. As relevant, topical, angry and powerful as it ever was with pounding drums and soaring guitar solos interspersed with a mosh pit ready hardcore approach.

MDC, like Conflict have remained true to their roots, their beliefs and it shows through on an authentic, committed and passionate album. It is one of the best of the year for me and lets hope that it galvanizes a whole new generation into resistance!”

The cd is out but the album is set for release on November 23rd and you can all the details here:

What issues does it deal with?
Well Trump is the biggie but animal rights and police issues as well.

How much does the Do It Yourself philosophy mean for you?
It means we stay away from big business , because they sell off the environment or alcohol.

What is the situation in the USA in the context of anti-fascist political groups and squats? What is the country that seemed to you to be more active from this point of view in your latest tours?
The Nazi right has become emboldened thanks to Trump and his intolerance about immigration. Scary days around the world. We are gonna need you soon so get ready.

What do you think about the current punk situation around the world?
I love what Sophie has been getting at in her films. She and I are excited about politically aware becoming involved. Rebel Riot from Burma and many groups of politically aware folks in Indonesia… we worked with the “Ponti” group there …health supplies

As a politicized band like you have always been, what would you say to those groups that call themselves punk but do not send any messages against fascism, capitalism, racism, sexism, homophobia, authoritarianism or militarism?
I’d say every band has at least 1 political band. People are stuck trying to look cool.

How hard is it to stay a band after all these years?
Well my philosophy became you can walk away but I’m staying in the band … hence I’ve had 4 guitarists 5 or 6 bass players… Al on drums has been fairly with me. We are the two lifers.

What is in MDC’s future?
The future is today… we will continue to tour and record. This is the life we chose. I love it.

Interview by T.S.
Translation by E.C.