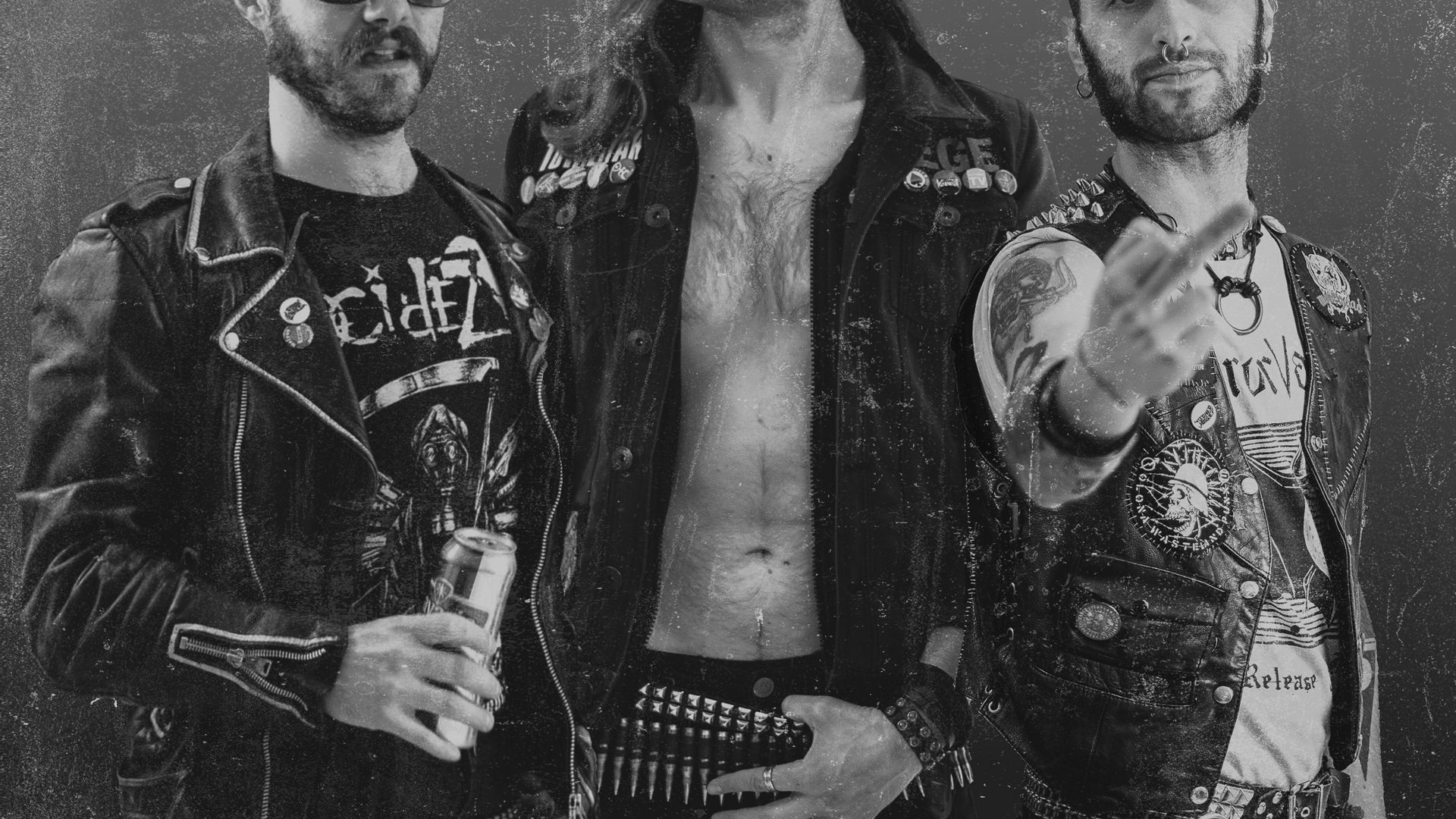 Olona Valley will be destroyed at dawn

Since 2012, Overcharge have run around the underground scene “wild and free” (the quote is a must), with a series of ingredients that mark them: a proudly and strictly Motörhead-style trio, used to loud deafening sounds and to polluting, thundering means of transport, with in the heart the raw and dystopic images of the worst post-apocalyptic B-movies.

Nothing too far from our neighborhood: this valley haunted by asbestos, concrete, dioxin and asphalt, risen around the stream Olona, that, from the Swiss border dissolves into the Milan dumps. In this underworld, never too hidden, we spread our need for activism, for brother-like community with those who love the noise, our need for distance from the homo habilis that has spread on these lands, for distance from his bigotry and from his apathy.

From the dawn of the most raw and barbaric punk, someone foresaw all of this: “The nightmare continues” … and we bathe in this great Hell called D-beat, in the Swedish chainsaw-like sound, in the irreverent and clear-headed hardcore, in the senseless rhythms of people who grew up listening to Venom, Exciter, Carnivore and Razor.

“Metalpunx” is Overcharge’s third effort, officially released on March 20th, 2020, after “Accelerate” (2014) and “Speedsïck” (2016). Yeah, we like straightforward, direct titles. The pregnancy for these 9 new songs was long but not too troubled, typical for those who find motivations and incentives on every instant: concerts (on and off the stage), tour life, hangovers at Festivals or even just at weekly rehearsals, after 9 hours at work and a dinner of stale crackers.

The dearest and most loyal friend supported us: Ciube, from Dufrense, in his Raptor Studios in Vicenza, already at work with Hobos, Slander and Destrage. He, the most precise, passionate enthusiast of valve head sound and analog processors; us, sweating like Samoans in these 6 days of July 2019.

Don’t you want to schedule everything for good? Without rush, with the precision of the Swiss we‘ve always loved and mixed with. You summon everyone interested: Mirek, from Phobia Records, who invited us at FearFest in Prague; that insane man of Dave (Angry Voice) who runs a label, a shop, an autonomous space and a little family all by himself in the middle of nothing between Dresden and Cottbus; our cousin Arca (Motron/Calimocho Autoproduzioni); a few nuts from South-eastern Asia for the tape (Shammir from Basement Rekordz); Tuby and Alina from Memento Mori for videos, teasers and fun stuff on social media; all the unfortunate persons from Olona Wasteland Punx collective, helping us with D.I.Y. merch serigraphy; Curby, for the Obscene Extreme Festival; certain Lautstürmer, from Malmö, dean of kang-punk, former Mob47 and DrillerKiller, for two release parties at the end of March.

And instead, Man is a sickly creature and all twisted divinations became reality, in a mix of Toxic Holocaust covers, a Bruno Mattei film and Camus’ “The plague”. Overcharge faced the birth of their “Metalpunx” armored in helmets, nails and various leather, gasoline tanks and scarce hydric reserves, against Humungus, Lors of the Wastelands, commanded by the fearsome Prof. Birkermeier.

Someone finds new life and purposes in tragedy for their being naïf, raw and bizarre. A lot of them surely take advantage of the opportunity to record complete discographies at the PC, purchasing a soundcard from Corporations and winking to the under-payed shipper.

We haven’t turned on an amplifier in two months. We haven’t broken a stick against the snare for a long time. The first time it happens again, a benefit will be necessary to buy again all the gear.

But adrenaline itself will pay off the wait. And here the “survival of the fittest” rule does not count, doesn’t count natural selection, eugenics or any other bullshit from wretched Hulk Hogan-like disguised wretched individuals.
Only passion counts, the desire of looking at each other in the eyes and of watching hundreds of other weirdos, sniffing sweat and sitting on the virus of tinnitus. “Keep coming back for some Black Diesel Breath”.

If, like Overcharge did, you want to write something about your band or new release, contact us.