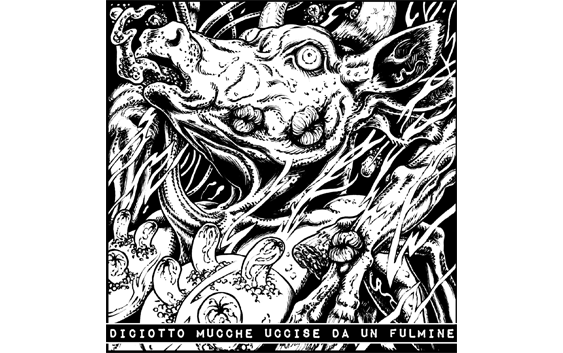 Did I ever tell you the definition of insanity?

Some names are hard to forget, and they strike you with instant curiosity. Lately, I’ve been hearing a lot of people talk about Diciotto mucche uccise da un fulmine (which literally translates to “Eighteen cows killed by a lightning”), a hardcore punk band from Trento, Italy, and my curiosity was immediately through the roof. Maybe it’s because year after year Trento has earned itself a spot at the top of the Italian hardcore scene (with bands like Grandine, Attrito and Congegno just to name a few), maybe it’s because while  searching info about this band I learned that cows don’t actually know that seeking shelter under trees during a thunderstorm isn’t the best idea… or maybe it’s just because in 2019, a band that has the guts to dare in every aspect of it’s art like they do is extremely rare. Yeah, ‘cause if you think the name of the band is weird, you are yet to see (and hear) anything. Diciotto mucche uccise da un fulmine is a strange record in the best possible way, a hidden gem that had me constantly smile during it’s 40 or something minutes of playtime (the exact same smile I had a long time ago when I first discovered System of a Down and thought they were the weirdest band in the world), from the amazing, almost hypnotic electronic intro “Disfudance” to the masterpiece in the masterpiece, “L’uso sistematico della Forza” (translate the lyrics and have a read, trust me). I also particularly enjoyed the guitar work in this self titled album, with well crafted and well played riffs, made even better by the production, in pure hardcore fashion (even though the word hardcore doesn’t give justice to a band with this many influences from all around the music world), which emphasizes a crushing rhythmic section. As for the vocals, I’m finding it really hard to talk about ‘em from behind a keyboard, the singing style in this record is insanely peculiar with screams, growls, monologues, gang vocals, church-ish kind of vocals, from super high pitched to super low pitched voices that proclaim lyrics on the edge of sanity, that may be the strongest aspect of the album. Nihilism, consumerism, blasphemies, weirdness and a pidgeon named Giacomo make Diciotto mucche uccise da un fulmine a memorable experience, because let’s face it, it’s only when you find yourself asking “What the fuck did I just listen to?” for several minutes after you’re done listening to a record that you realize how well it worked. I’m signing off, more than sure that my word didn’t give justice to an album that needs to be listened to to be really understood, promising myself to catch this band live asap (speaking of which, my colleagues here at radio punk talk about their latest live performance  here) and quoting the only question that came to my mind after the first listening: “Did I ever tell you the definition of insanity?”
Album rating: 9/10
Reviewed and translated by Teo