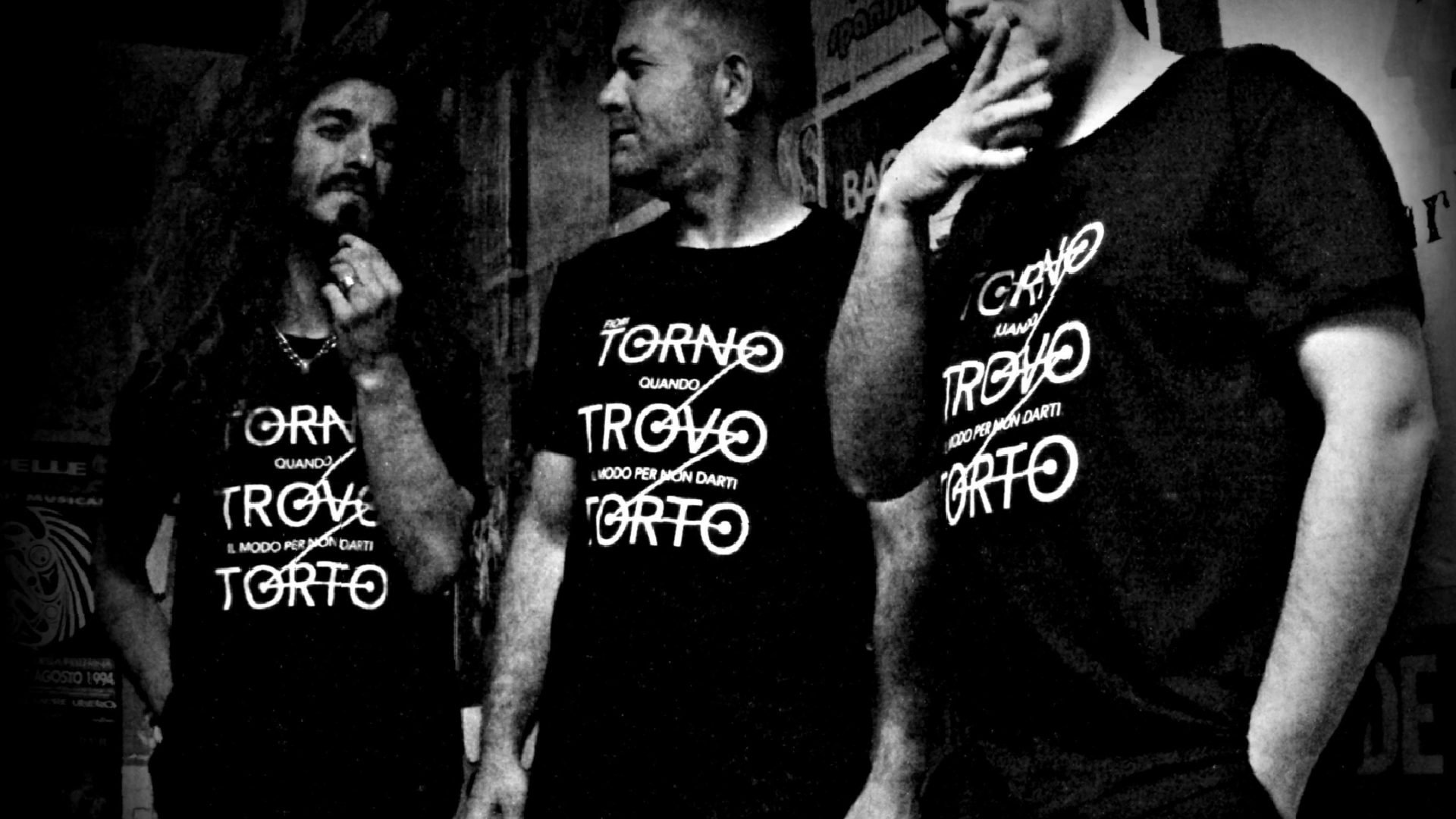 A chat with I Fiori, band from Turin

Radiopunk :Hi guys how are you? It’s a pleasure meeting you. You  known each other for a long time and you’ve collaborated on other projects in the past. How the Fiori project and the album L’Eleganza was born?

Azza: Hi Radio Punk and, first of all, thank you for your attention! So, the birth of the band happened roughly like this: after the dissolution of Titor, the band where Sandro and I played, we realized that the desire to play and scream our thoughts was too big to put in a drawer. Aware of the difficulties and the demanding work, despite other priorities (the stage diving times have passed by two decades), we decided to start immediately by forming a new band and writing new material to be collected in an album. The challenge was a new song to test. We submitted this madness to Luca, an exceptional friend and musician who fortunately accepted. About a year later, L’Eleganza came out.
Luca: hahahaha fortunately … I was looking forward to playing with them.
Sandro: Hi Radio Punk, as the other two have already said, I found these two “poor” people in front of the door, they wanted to learn how to perform a perfect “hair cut”, and so, after a few days of training, I gave him the opportunity to work at my barber shop

RP: I read somewhere about your genre a curious definition: “Rock of postpunk extraction in Italian, halfway between Minneapolis and Washington DC” tell us something more

Luca: Ahahahah … sure!, I Fiori do not follow one genre rather than another, our songs are the result of our experiences, both musical and personal. We do Rock because it is in our DNA, but we are also Punk and PostPunk because  our main concern is not pleasing people but to communicate freely and without filters. We make intimate music.
Sandro: In Minneapolis there were the Husker du, but also Prince. In Washigton DC there was (and still is) the Dischord Records, Ian McKay, Fugazi… and they were close to Seattle… all those stuff that flows through our veins. We don’t hide our influences, we liked the idea of “exposing” them in our bio.
Azza: As the other two have already said, what matters is not only the salami, but also the peel.

RP: L’Eleganza is a complete, mature and complex work, the texts do not hide moods of disappointment and rupture, as Cane mangia cane or Cose Piccolissime, and the other songs also veil a desire to denounce some propaganda attitudes that distinguish the world today. What are your messages? Is there a common thread running through the whole album?

Luca: The album does not want to give messages but rather a vision. The lyrics, in a completely random way, have a common denominator:  the individual and his personal search for an intimate balance. This concept can be seen in the song “IMMOBILE”, which is also our single … In other songs we try to mark limits and a clear detachment as in “Cane Mangia Cane” or “Flessibile“. Other songs show  more intimate discussions, see “Intorno” and “Come Dio”. So the album focuses on the human beeing with his criticality, being and not appearing. The meaning of the album is not to be dominated by a false calm perception, but always ask ourselves the most difficult question: am I really what I can see? Hence the title “L’eleganza”.
Sandro: When I write my songs I like to think I can show a little bit of what I am and I feel free to tell personal things. So, the central idea rounds on subjective visions that become group visions on music.
Azza: Huh? Sorry, I got a uazzap.

The album focuses on the human beeing with his criticality

RP: The sound of this album, the same we meet in your live performances, comes straight to the point! The voices are articulated in fascinating melodies supported by a rhythmic dimension that hooks you and never leaves you. How did you define the sound of the record?

Azza: Actually we wanted to play some Pop, then the situation did fall apart. We’ve never defined a sound, I think quite the opposite happened
Luca: Exactly, our sound is like wild fruit, it is born and grows where it feels good, it is not studied for pleasure.
Sandro: We’ve used an instagram plug-in called defi-sound. Awesome! Fedez uses it too….

Our sound is like wild fruit, it is born and grows where it feels good, it is not studied for pleasure

RP: Could you tell us something about the creative process within the band?

Azza: As we mentioned about our sound, there’re no specific rules. Usually we start from an idea of Sandro or Luca or from a song already set. Then the final version and arrangement.
Luca: each of us is essential … we are all artistic producers!
Sandro: more or less like Il Processo del Lunedì

RP: Recently we have seen you on several stages especially in northern Italy. What has changed compared to the past, not only on a personal and band dimension but in general, considering the meaning of live show as a participatory and sharing moment?

Azza: Surely the desire of live show as a model to spend free time has weakened; the live club is no longer intended as a meeting place, and therefore fewer and fewer people. But fortunately our audience shows us a lot of enthusiasm. Live shows are like a party and it must be the same for the band as for the audience.
Luca: Times have changed a lot, everyday life has changed a lot, the priorities and the way in which we relate to people changed too. When we were kids, live shows represented an event that was very close to the mystic mood. Today, neither the bands nor the audience have changed, but the perception that both protagonists have of their roles. Live show is the most intimate moment in which the artists undress and let themselves be watched by the everyone, the stage becomes your bedroom where you are not ashamed to cry, laugh, dance or masturbate, all with the same serenity. If we are able to return to people this perception, so people will return to live live shows in a  spontaneous way.
Sandro: In this moment, it is certainly not rock music that fills the small and medium clubs, so we do not expect sold out, but we just think that we will never break up. One day rock music will return to fill clubs and we will be ready for that moment. Obviously, I just said bullshit. Rock music is following the example of jazz music, it looks more and more like a flutter that only those who make it like.

RP: I red on your website that playing is a visceral need and I must say that having witnessed your live performances, this statement comes really clear. Can I say attitude?

Azza: Attitude…..it is an important word and we’re glad if you saw it on us
Luca: Attitude is everything. Punk, Rock, Pop, Funk they are just definitions.
Sandro: We have the Azzitudine

RP: What do you think about  underground music in Italy and in your city in particular, today?

Luca: As it always has been, in my opinion. The talents, the real ones, smell bad odour of sweat and have dark circles from missing sleep. The rest of them meet each other scented and smiling at 4 in the morning in the “icool club” of the city. anyone who achieves results sincerely and transparently is underground, and those who define themselves  like that is similar to those who think that “MOTORHEAD” is a new clothing brand.
Sandro: I never thought that music is divided between underground and non-underground. Music spreads, through mainstream or other ways. The underground does not exist. let’s do an example, CCCP: classic sound defined by many as “underground” but they had immediately a national relevance, spread by channels that are anything but “alternative”. On the other hand, think of all the “Pop” music that is not spread mainstream and in fact no one likes it … let’s say that there is no “panorama”, there are bands that manage to become mainstream, others do not. We don’t, for example. Sorry, I feel like crying.
Azza: Come on Sandro, don’t do this. Here, smoke this …

RP: What do you think about the current music context, from creation, to fruition, to distribution? Is it possible to emerge with the new fruition tools?

Luca: Music is like TV series, there are many and you risk losing orientation and relying on the cover or the “most famous”. For the music market, the speech does not change, we are bombed by “sounds” rather than music, by images and media and television characters rather than musicians and authors. The means by which music can be heard, “used” and disseminated are now science fiction. For some aspects, an incredible convenience and speed of distribution, but also a saturated market. The goals have changed, Rock’n’Roll dreams exist and fortunately they will exist … those who want to make Music will do it and will continue to do it for the pleasure of doing it, they will do it for that visceral need to write. The goal at this point will already be reached.
Azza e Sandro: I am a patient boy…I wait I wait I wait I wait.

RP: What do you listen to? And finally … your plans for the future?

Luca: We use to listen to everything, what a stupid answer … Ehehehehahah Apart from our personal opinions and habits, for sure  rock and punk music. But we listen to the most different things. Music is music, the musical genre is a commercial plan to sell. Personally the last things I listened to were “Phantom of the opera – soundtrack”, “Cage the Elephant” and the last of Ozzy Osborne … then a multitude of music from pop, R’n’B, hip-hop to trash metal. We are not planning for the future, we are writing new songs, we are having fun finding new arrangements. We are laughing, arguing, drinking and smoking. In short, we are preparing for a new chapter.
Sandro: as Luca says.
Azza:  Melvins e the Mispft..the mstf..the Misffitts

Interview and translation by Elisa