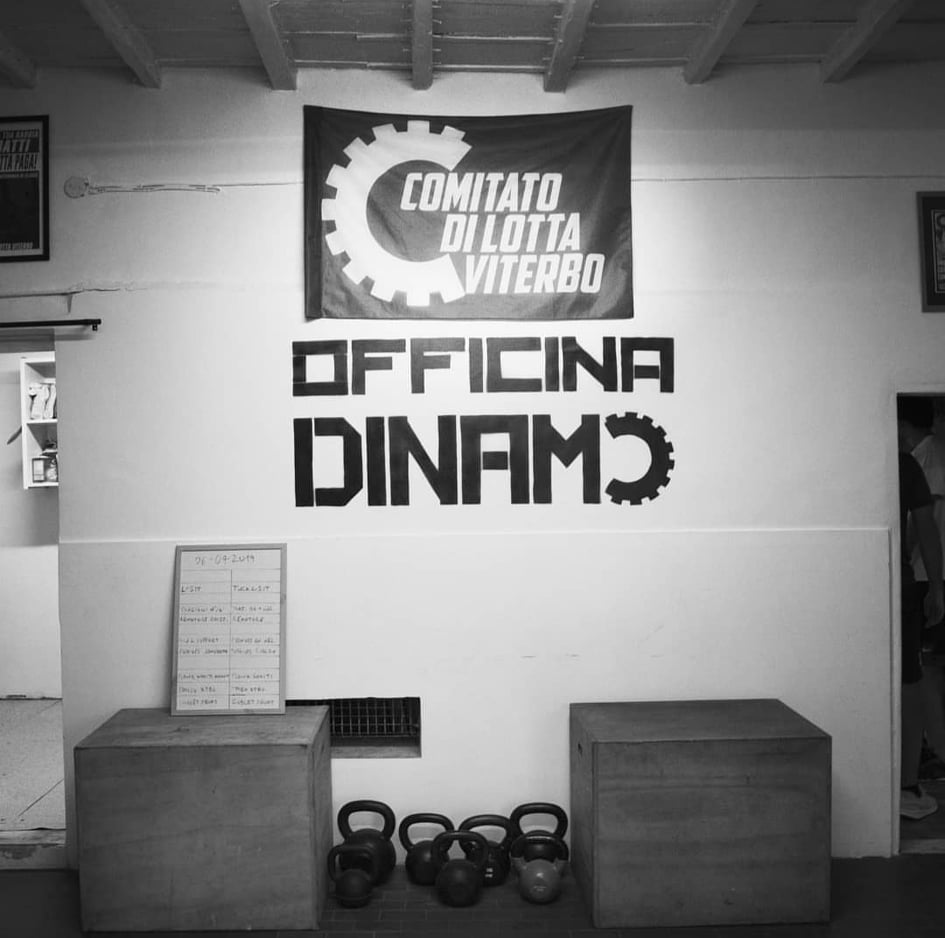 Story of an unusual correlation between a hardcore punk crew, a political collective and a sport
team

My name’s Gianmarco and I’m from Viterbo’s province, to sum it up quickly I’m a part of the Tuscia clan (the crew that organizes hardcore punk live shows in our area since 2009), I had a hardcore band named Noprove; on the militancy front, I’m a member of “Comitato di Lotta Viterbo” (literally “Committee of Fight from Viterbo”), a group that changed the name a couple of time during the years but still exists and has tried to change the state of things as they are for a few years now.

With the other guys from my “group”, some years ago, I’ve formed an excursion team named “The Oplita”; furthermore, with Matteo (another guy from our bunch, as well as former Noprove bass player) we formed, around the end of 2015, the Riot Squat Team, so today, even if we are on Radio Punk I’d like to talk about Riot Squat avoiding the classic topics and, to the surprise of many, talking about sports in here.

On the premise that our crew was born in, and possibly because of, a working-class, unofficial gym located on the medieval part of Viterbo’s old town; most of us were already into hardcore punk and oi!, and we needed some initiative to fund our little gym so in November of 2009 we opted for the first concert in what we used to call “Cantina del Gojo” (literally “Gojo’s cellar). All of this premise wasn’t really to explain the birth of Tuscia Clan but rather to show that the correlation between Hardcore/Skinhead Crew and sport was there since the very beginning.

I was really into this little working-class gym, and years later Matteo approached it the same way; I used to take training courses to become an instructor while also studying on my own, later I started to take the same courses with Matteo; in the meantime, for several problems (also considering that I began to work full-time in other gyms) we had to close our little gym.

With time both me, a person that worked in that field, and him, an outsider, realized that some of our methods and knowledge weren’t adequate to what we saw in the vast majority of mainstream and SADLY even working-class gyms.

We, therefore, started to utilize Riot Squat as a mean to divulge and explain some exercises or share scientific articles that we deemed useful and meaningful. Meanwhile, we noticed that a lot of our friends were starting to follow us, they weren’t just the ones that trained at the old working-class gym, nor the ones that worked out in the gym I used to work at, instead a lot of people that started training at home, in parks and so on…

We always pushed for a type of approach that was more focused on performance, athletic preparation and strength rather than the same old appearance; all of this led to some really great result for our guys, for the friends we trained and it got us some attention from people that trained for combat sports, a field very important in our opinion because those in “our field” should never give it up!

Now, you’re probably like: “What does all of this have to do with punk”?

A lot we believe, in fact, it has to do with all the areas, from music/attitude to even politics.

One of our goals is to greatly limit the stereotype of the self-destructive, nihilist and pessimist punk while spreading a more positive mentality and to us, this process is achieved even through physical training; don’t misunderstand: we’re NOT trying to be those straight-edge-hardline-assholes (that we clearly aren’t haha) but instead, we’re opting for a middle ground from things that we saw through all these years!

On the other side, which we deem very important, since we are militants and close to some political circles (no, it’s not that obvious if you listen to punk and Oi!, you could also not care at all about it), we believe the thought of “Communist = self-destructive, drug-abusive, weak mint” should be dropped and that the betterment, the optimism of single militants, our approach to the class should go through this as well; besides the fact that the simple spreading of HIGH TIER working-class gyms (High tier as in a tactical level, we’re not talking about furniture and other stuff like that) would create a wide and functional aggregation.

Side note: the name clearly has a punk callback as it’s a reference to the song “Riot Squad” by Cock Sparrer, but it doesn’t share meanings with the song.

Anyways, with time we managed to become an online team that spread actually tangible events, like stages in gyms (in our area and not) and in working-class gyms.

Since the last august, we launched a calisthenics (bodyweight exercises with rings and bars) class in our place in Viterbo, named “Officina Dinamo” (literally “Dinamo’s workshop”).

The place is multipurpose and so it’s utilized by Tuscia clan for Hardcore punk/Oi! events and by Comitato di Lotta Viterbo for political purposes.

We could say that our course, despite my work commitments and other stuff, has been a real success, so much so that sadly we had to decline new potential students for space issues and in fear of not being able to precisely follow everybody.

The team, as of today, includes, besides me and coach Matteo, all the guys I personally follow and all the guys that partake in the calisthenics class. Not going to lie, there’s a strong will to open an actual working-class gym dedicated only to sports instead of taking two days per week off of a place that’s already multifunctional.

One of our biggest accomplishment is realizing that we limited the negativity for some people in these tough times:

–  Amongst other things we noticed that the calisthenics students from Officina Dinamo can train, the BASIC training, mainly on their own from their homes, with limited space and few pieces of equipment; we handed them a protocol of 9 customizable training.

–  We urged people that never trained before this period to start doing so now.

–  We published videos of exercises and training reproducible from home.

– A lot of people that come from our field but different cities have contacted us and given us their trust.

Sorry for the long premise but it was necessary to make sure we were all on the same page, before saying goodbye I renew the suggestion to all the readers by leaving some tips here on how to train during quarantine (even though I know a lot of you are still working, myself included), in addition to the ones you can find on our Facebook and Instagram pages (I wrote this because you can find some useful photos and videos on them):

Make simple exercises, few but well-executed, like for example:

–         Pulling exercises: Pull-ups if you’re fortunate enough to have a bar or something to grab on to, or Australian pull-ups which are performed underneath a sturdy table (hit us up to know how specifically).

–         Pushing exercises: The common push-ups will do just fine, you can then add something to make them harder or easier for yourself (check our Instagram for videos about that).

–         Leg exercises: Air Squats (Squats without weights), Goblet Squats (utilizing a pack of water), squats with one leg for the more advanced ones.

–         Abdomen exercises: Plank, Lateral Plank (write to us to know the difference or if you don’t understand something)

Another advice I feel like giving to you is this: don’t focus on numbers, like maybe reading from here and there you read stuff like 5×5, 4×8, 3×10 and so on… Especially now that from home you have to train bodyweight is useless! The reason is you can’t figure out the weight but instead you’re forced to use the weight of your own body.

We suggest working with percentages so that you can understand what’s your limit (the number of repetitions you can do with your body weight per exercise); of course, your limit can be tested only after you figure out the correct technique for that specific exercise.

We also suggest working with the time everyone needs to do the repetitions needed.

This way, you can, for example, structure your training like this:

This is just an example, you can find another example with percentages and time on our social pages, let us know!

To conclude: we flanked the sports field, like the excursion one, to other topics both political and musical/attitudinal, all of this path have a lot in common and we think these are all good things to pursue together.

We hope, having deviated from a strictly punk talk, that we didn’t bore you and that you find this useful because now more than ever the aforementioned positive attitude has to take over, considering we can’t even attend/play live shows…