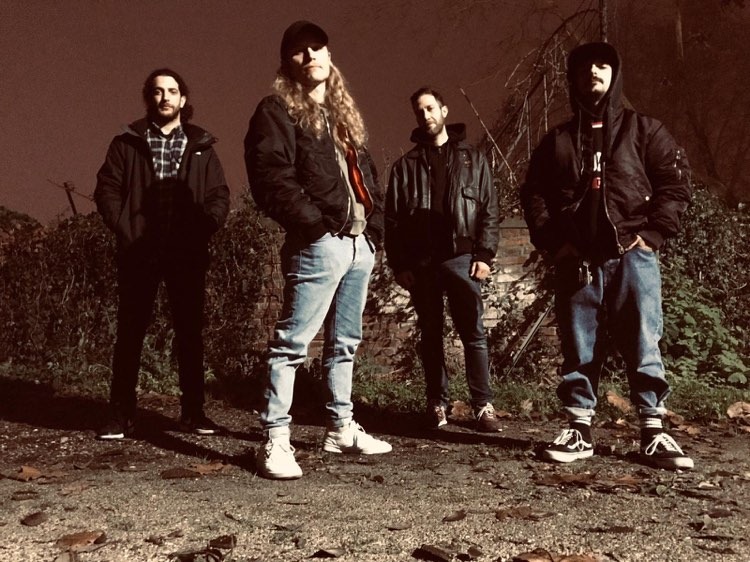 We had the chance to interview Rough Touch, HC band from Ferrara. Enjoy the final result!

Radio Punk: let’s break the ice, tell us a bit about yourselves.
Rough Touch: Hi all, we are 4 assholes from Ferrara. We have known each other since we were acne-riddled teens and we have pretty much always been a part of the local music “scene”. Sanso, Nick and, I put this project together about a year and a half ago. For a couple of months, it was just the three of us and for a couple/three months we had a flurry of line-up changes as some of our friends helped us with the bass travelling all over from Veneto. In September 2018 Seddy joined the group. He had already played in various local hardcore and metalcore outfits that we had known of. We had no idea he would be interested in joining this kind of stuff. We released our first self-produced demo last summer and other than playing as many gigs as possible we are now writing new material!

RP: What was that brought you to start this new musical project? You come from other experiences such as Game Over, a well-known Italian band that if I am not mistaken is still going. Why did you feel the need to start a new band?
RT: I can tell you that what pushed us to start a new project came from a series of synchronised events. You are right, both Sanso and I played in Game Over together and for a variety of reasons the number of live gigs has dwindled a lot in recent years. If we add that a couple of years ago Busted Out disbanded it comes as no surprise that we found ourselves with a lot more free-time to dedicate to something new. This time we were looking to make something more extreme, evil and malignant compared to our previous projects. We were looking to do something that would sound new as well. I think we have managed to do so even if there is a lot yet still to be done.

RP: The material you play is a blend of metal and punk, a genre that has found a lot of room to grow and a lot of interest in Italy, currently. I personally find this choice to be quite on point with that. Can you tell us why you chose this genre?
RT: I agree. This crossover is picking up a lot of interest from Italian kids these days, especially those of our age or a bit younger than us. I think that bands that play this genre are still outsiders in the Italian hardcore, punk and metal scene. That might be because of how new the genre is. While in the US and UK plenty of bands mix metal with punk and hardcore, here it seems that people are “conservative” in that. It seems they prefer a genre that still has a lot to do with the past. At any rate we did not sit down to discuss the genre. We simply decided to play the genres we like to play trying to come up with something more violent and extreme compared to what we used to. We also specifically tried to add a touch of evil making it as fresh as possible.

RP: tell us about your local scene. What are the problems, advantages and, characteristics that define Ferrara?
RT: Meh… I do not know if we could really talk about a local scene. Meaning that there are indeed many people that like extreme music but there are many critical aspects that force us to rely on neighbouring cities. Let’s start with talking about the positives. Ferrara is a lovely city, one of the most beautiful cities in Italy. It would be the perfect scenery for extreme music gigs. On top of that we have the very few very active people that work hard to keep the scene going. Here, sadly are all the positives. One of the biggest problems with the city are the people of Ferrara themselves. There is about an event a month. However, those that say they are fans of the genre do not lift a finger so that things improve in the city. Even further, there are often many useless feuds going on. They can be more or less out in the open and they are often coming from one party only considering the two that could be involved. More than that is that people from Ferrara are notoriously lazy and would rather sit at a pub talking about nothing instead of going to concerts and try to find out new bands that they might even like. We also have to add that there is only ONE VENUE to play our music at. Up to a couple of months ago there were two of them but eventually one decided to stop putting hardcore gigs on. It was a decision that was taken after having given the go ahead to organise a night were Big Cheese from the UK would be playing. It was especially frustrating because we had already started organising it and contacting bands. It was something that I am reporting here because it especially irked us. To add to it, the owner decided to show the “At the Matinee” docufilm about a month ago.
We are extremely sorry to have to talk about our city like so. It is unfortunately the situation we are in as of today.
We always try to get more youth to get closer to this genre of music so that they might understand its values and so they can become part of a healthier, lively and, inclusive scene in the city. Also, when I say “we” I mean to include all the people that are part of the “Distruggi La Bassa” and all those that participate with them.

RP: rumours and whispers suggest that you might be close to recording your first album, do you want to spoil something for us?
RT: Well, actually not. That is if you mean a proper full-length ahah. We have a couple of new tracks we wanted to record and release as an EP to promote asap. Our plans were to record in April/May and then look for labels that would be interested in releasing it as an LP. The tape we self-produced came out in summer 2019. This time we want to do something better. That is because a label would help us with printing and promotion and that would be very helpful for us. In terms of a full-length, we are not in a hurry to release one. There is plenty of time for one. If the conditions to record one materialise then we will not shy away from it.

RP: even if you are, allow me to say it, a “young” outfit, you have plenty of lives under your belt already. You also have something outside of Italy and you have played at important gigs. How can you explain this? Have you found the formula to arouse the interest of the people that come to your gigs?
RT: I wish that were so, to be honest ahah! If you manage to pique the interest of those around you pushing them to listen to you it is already a great milestone for a band, especially if that is right at the beginning. The four of us are quite satisfied with how things have gone in this first year and a half together. A lot of people both in Italy and outside of it have already told us that they like the material we released last year. This has made us happy because it means that we managed to give something to those people. I hope more and more people give us a chance by trying to understand the message we want to send. We are doing a lot of live shows both inside and outside of Italy. It must be said however that the virus has hampered our plans until the end of April when we are playing outside of Italy for a couple of festivals. We just have to wait for this quarantine period to be over.

RP: According to you is it necessary to take a stand against any form of racism and fascism in the Italian underground music scene? What does that mean to you?
RT: I think that it is necessary to do so in the Italian underground scene as well as our own private lives. We, however, have to nurture and apply it intelligently; because it might end up in pure propaganda or violence. No matter what kind of violence you end up being a fascist yourself. Weren’t fascists the ones using violence and propaganda to impose their ideas? I think it is good for everybody to be tolerant, empathic and, open-minded. I think it allows people to enrich their mind opening it to a variety of points of views that unfortunately are denied to those that are mentally closed or afraid of that which is new, different, foreign.

RP: the interview is over. Please go ahead and say what you want to your readers!
RT: First of all, thank you Radio Punk for this space which gives us the opportunity to introduce ourselves to people. We hope we have managed to get the people reading this interview interested in us. If that were the case you can find our material for free on our Bandcamp page (roughtouchfc.bandcamp.com), Spotify, YouTube and various other streaming platforms. If you like our shit, we hope to see you at our next live performance!
Bye!

Interview made by Ciro