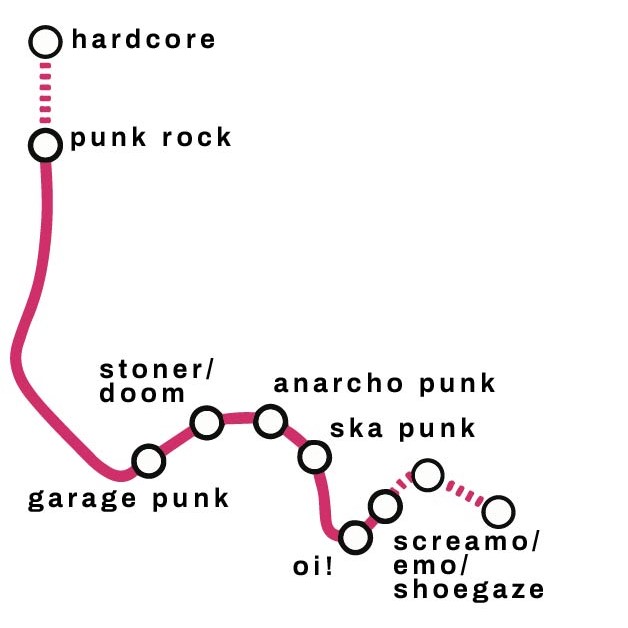 Hello there, who’s writing is just a bored Genoese buried in his house and slowly running out of ideas to kill time.

Therefore, I’ll seize the opportunity to do something I’ve been wanting to do for quite some time that is positively useless but reminds me that, even if as every Genoese guy I spend most of my time complaining or “mumbling”, (now more than ever) the independent music niche is flourishing and has much to offer when it comes both to concerts and releases.

A lot of bands from a lot of different genres, one day it feels like California the other like Seattle, or there abouts.

At the end of the day we are still in Genoa, and I can’t really tell you why, but it always blatantly resurfaces in all the bands you’ll find from here on in, some of them being capable to be so different and yet so intertwined with one another.

LEISFA: Acronym for Luca e i suoi fantastici amici (Luca and his fantastic friends), they formed in 2010 from two bands of friends (NONE and BOXING DOGS). They started with the most classic Italian hc punk style totally reminiscent of La Crisi, CGB, SKRUIGNERS, then mutating or, to put it better, maturing their sound, keeping hardcore density while winking to a more Grunge/Emo/Alt Rock sound. Their 2017 “Liturgie di Fallimenti e Sconfitte” is probably one of the best releases of the last ten years in Genoa’s punk scene. They don’t play much, but when they do, it’s magic.

LOSERS PARADE: Veterans of the scene (with members of both Downright and Kafka) they’re a quartet scattered from Genoa to the East Coast (Chiavari), they play good old school hardcore well performed and never dull giving Black Flag/Bad Brains a Stoner hue. Put your flanell on and light a j.

COCKS: They blossomed out of a friendship developed on the benches of a tech school in Sampierdarena. Just four friends that have known each other forever rehearsing together and sharing their passion for punk rock. After a number of adventures all across Europe riding unreliable vans, they’re going to turn 10. In 2018 they released “Good Luck Have Fun”, via the folks from Flamingo Records. That was just the beginning of an intense and tear-jerking love story…

ANIMOLS: We’re talking about 4 good old friends here too, chiseled in Sestri Ponente block. They started playing in the Hoola Hoopers and then, for no apparent reason, started writing songs about animals. Geniuses? Fair and square. They’re unleashing anthems one after another. Rumor has it that “Cane” will soon become the city’s official anthem.

GOONIES: A band of kids that aren’t really kids anymore, since they probably can pride themselves in being the longest lasting formation still kicking. If Captain Ippo’s calculations were to be confirmed they’d be close to their 20th birthday! 90’s punk rock in pure Ignoranti’s, Impossibili’s and Retarded’s style, they released their latest EP “Connessi e soli” in 2017.

SMALL THING: A quartet operating since 2015 , they contaminate (in a good way) the most classic punk rock with melodies and tempos coming directly from Nofx/Bad Religion style melodic hardcore. They released their first vinyl in 2019 for Flamingo records. They boast having the best guitar player in Genoa and it’s probably true.

SANTAMARIA: A young band refusing to be taken too seriously, but with the innate ability to make of this feature their strenght. They released their first eponimous record in 2019, once again thanks to the Flamingo boys. Straight and in your face punk rock finely tuned with influences from bands of the new punk rock garage wave such as Fidlar/Skeggs/Wavves.

I PRESUNTUOSI: New but not so new entry, since we’re talking about a band made up of members of relevant Genoese bands coming from those glorious 90’s days (IGNORANTI/GUERRIERI/BEAT OFF). They just picked up the sound they left 10-15 years ago reshaping it with a melodic hardcore Nofx type of vibe. Their first record “Siamo noi i veri eroi” just came out.

L’ESPERIMENTO DEL DR. K: Veterans of the Genoese scene, L’Esperimento del Dr. K hides terror and romance within it. Horror Punk in full Misfits style, guitars and melodies stuck to the brain. Last June they released their first record for our dear Flamingo records Label. The city will be destroyed at dawn!

RATBONES: 1-2-3-4 and finger pointing, the Ratbones have been carrying on their punk rock for years with the Ramones tattooed on their hearts. After several line-up changes and the inclusion of foreigners from Milan (which we forgive), in recent years they have released several Eps and brought their music to a tour in Canada. Gabba Gabba Hey!

ALMENO6METRIDATERRA: Young guns in the scene, last October they had their first release via Taxi Driver Records and Lanterna Pirata, in which they showed off their skills, flexing a power piece that mixes all the rage and melancholy one can feel. It really is something else, especially considering the kids are just 20 years old.

GAZED: They define themselves as “Working Class Wave”, these 3 big fellas with ferocious eyes have an heart of gold and they let it shine through their Shoegaze/Punk and their honest approach to it. Their self-titled release of last July had everybody in town head over heels.

SAAM: We’re talking again of new blood of the scene, uniting the most pristine emocore sound with influences from Italian indie music (Gazebo Penguins/FASK/Quercia). In 2018 they had their first release titled “E’ facile consumarsi le unghie” and people are murmuring about an imminent comeback.

CRTVTR: It should be pronounced “Cartavetro”, a quartet from Genoa that’s been around for some years now and yet is still hard to classify since they mix post hc/post rock/math in their own way. They even raised Genoa’s flag in China where they toured!

SHE SAID WHAT?!: It’s a bass-drums-voices riot-grrl duo, Anna and Manuela. And sometimes Berna (the person who with infinite patience has recorded and produced more than half of the groups listed here). An eccentric mix of Post Punk and Power Pop, with ironic lyrics addressed to the politics of the First Republic. Finding a way to describe them is really difficult, so come to their live shows and you won’t be disappointed. In short, a nice show that makes you tap your foot!

I SASSI: Garage punk duo with guitars and drum machine, one rhythm, one tempo, three chords and go. In other words, the compromise between Devo and Skiantos.

Fel-d1: Captained by Monica, a Genoese punk veteran, Fel-d1 play a rough anarcho punk strictly in Italian, the topics are mainly (but not only) animal liberation, anti-specism. Their first self-produced ep served as a benefit for “Gatti del nettuno” project.

SATOR: Psych/Doom/Sludge trio, probably, in my humble opinion, the crown jewel of Genoa’s punk scene. You won’t find anything mundane or obvious about them, including their shows where a majestic wall of sound is paired with lights and graphics that are as simple as effective. Last December they released “Scorching Sunlight”. HAIL SATAN!

STALKER: Born from Kafka’s ashes, Stalker left (but not in their hearts) skank beats favouring a sludgy post hardcore sound that manages to hit you in the jaw, every single time and especially live. Bottoms up gigs and a lot of experience, old school never quits. They released their LP “Vertebre” in January 2019 via Taxi Driver Records and Lanterna Pirata.

KURT RUSSHELL: stoner inspired by Mastodon and the like in sound, but with a strong funky hint, maybe the only crossover band in town!

STIGLITZ: It took us some time, but finally Genoa’s punk scene has an oi band again! After a first live show in 2019 and some line-up changes they just released their first fully self-produced Ep. It’s full on Ligurian style oi, just think about Klasse Kriminale, also with a penchant for the latest Dalton/Gli Ultimi. Attitude!

NIMROAD FC: San Desiderio is a small village perched on the Genoese hills, but for them it is a small California. Ska Punk in Persiana Jones/Shandon style, with melodies and horns mixing all the time. In October 2018 they released a horror-themed Ep, “Quarantotto”. Pop a Ceres and take it easy!

A guy from Adescite Crew